Jim Bernard was elected Clackamas County Commission Chair in November 2016. He has served on the county commission since 2009. He previously served as Mayor of Milwaukie for eight years. 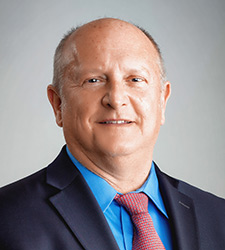 In 2001 Jim was elected Mayor of Milwaukie, a position he held until his election as a County Commissioner. His father Joe also served as Mayor of Milwaukie in the early 1960s. Jim credits his success as a public servant to his understanding that any successful undertaking requires outstanding customer service and innovative partnerships.

In May of 2017, after 92 years in business, Bernard sold a 3rd generation family-owned auto repair business in Milwaukie.

One of his proudest accomplishments was the creation of the Milwaukie Sunday Farmers Market, in cooperation with the Milwaukie Downtown Development Association. He was president of the organization at the time and now serves as President of Celebrate Milwaukie Inc. that runs the Market.  The Sunday Market provided Milwaukie residents an opportunity to access their Mayor and helped to bring the community together.

Jim has also served as treasurer, vice president, and president of the Automotive Service Association of Portland; president of the Milwaukie Downtown Development Association; chair of the Milwaukie Riverfront Board; and as a member of the North Clackamas Parks and Recreation Board, Clackamas County Coordination Committee, Complete Community Connections, Oregon Mayors Association Board, South Corridor Committee, Aquatic Center Task Force and the North Clackamas Chamber of Commerce Executive Board.

Jim's academic background includes a B.A. in Business Administration and Arts & Letters from Portland State University and a graduate certificate from the University of Oregon's Pacific Program in Leadership Development.

Commissioner Bernard has led multiple efforts to address the needs of the county.

Jim is a lifelong Clackamas County resident. In addition to serving the people of Clackamas County, he enjoys walking long distances, hiking, biking, golfing and traveling. He collects lapel pins and busts of presidents and other historic figures. His favorite travel destination in Oregon is the Mount Hood area and the Oregon Coast. In his spare time, he enjoys spending time with his wife Danielle and their two dogs, Frannie and Banjo, while raising cattle and chickens at their ranch on 6 acres in a rural area outside of Canby.

Learn about the 2020 Census