On May 22, Joseph Michael Tedrick, 33, was killed in an officer-involved shooting in Wisconsin. The incident happened while a U.S. Marshals-led task force operating in the Western District of Wisconsin was attempting to apprehend Tedrick.

Tedrick had been wanted on multiple warrants -- including one for Attempted Murder stemming from a September 2018 incident where he fired on a Clackamas County Sheriff's Office deputy. 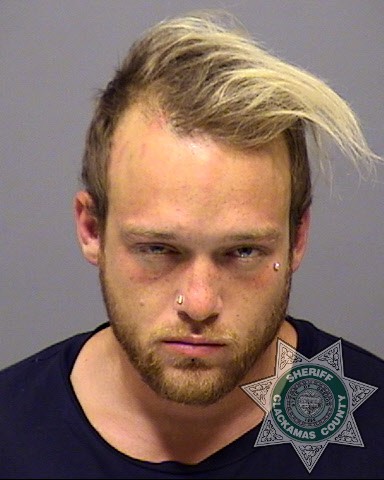 At about 3:48 a.m. on September 23, 2018, a Sheriff's Office deputy had responded to a 911 call regarding a suspicious person and a vehicle in the area of SE Bluff Rd and SE Serban Rd near Sandy.

When the deputy arrived in the area, she located the vehicle. As the deputy pulled up to the vehicle, she heard what sounded like a gunshot and something hit her marked patrol car. The deputy then left the area and parked a safe distance away to wait for additional deputies.

Before returning to the area, the deputies could see a flickering light coming from the location. The 911 caller reported also hearing a gunshot -- and told dispatchers the suspicious vehicle was now on fire. The 911 caller also reported seeing the suspect run from the vehicle to the east.

Deputies attempted to locate the suspect that night, but were unsuccessful. At the time, they were not certain if the suspect -- later determined to be Tedrick -- had actually fired a gun. Crime Scene Investigators (CSI) later confirmed that he had; they examined the vehicle and determined the patrol car had been struck by a bullet.

Clackamas County Sheriff's detectives took on the case, and identified Joseph Michael Tedrick as the suspect. Canby PD also assisted with the investigation. The case was forwarded to the Clackamas County District Attorney's Office and presented to a Grand Jury. As result, Joseph Michael Tedrick was indicted on Attempted Murder and a warrant was issued for his arrest.

A prior 2018 booking photo of Tedrick is linked above.

The Wisconsin Department of Justice news release on the May 22 OIS is reproduced below.

News release from Wisconsin Department of Justice: May 29 2019

ASHLAND, Wis. – The Wisconsin Department of Justice (DOJ) Division of Criminal Investigation (DCI) has been investigating an officer involved death (OID) in the City of Ashland, Wis. on the afternoon of Wednesday, May 22, 2019.

Two Deputy U.S. Marshals and one Sheboygan Police Officer, who was working with the task force, were involved in this incident.

DCI is leading this investigation, and is assisted by Wisconsin State Patrol, Ashland Police Department, Bayfield County Sheriff's Office, and Ashland County Sheriff's Office. The Wisconsin Department of Justice Office of Crime Victim Services is providing services to the family of the deceased. All involved law enforcement are fully cooperating with DCI during this investigation

DCI is continuing to collect evidence and determine the facts of this incident and will turn over investigative reports to the Ashland County District Attorney's Office when the investigation concludes.

No additional details are currently available.

Please direct all media inquiries regarding this incident to Wisconsin DOJ.