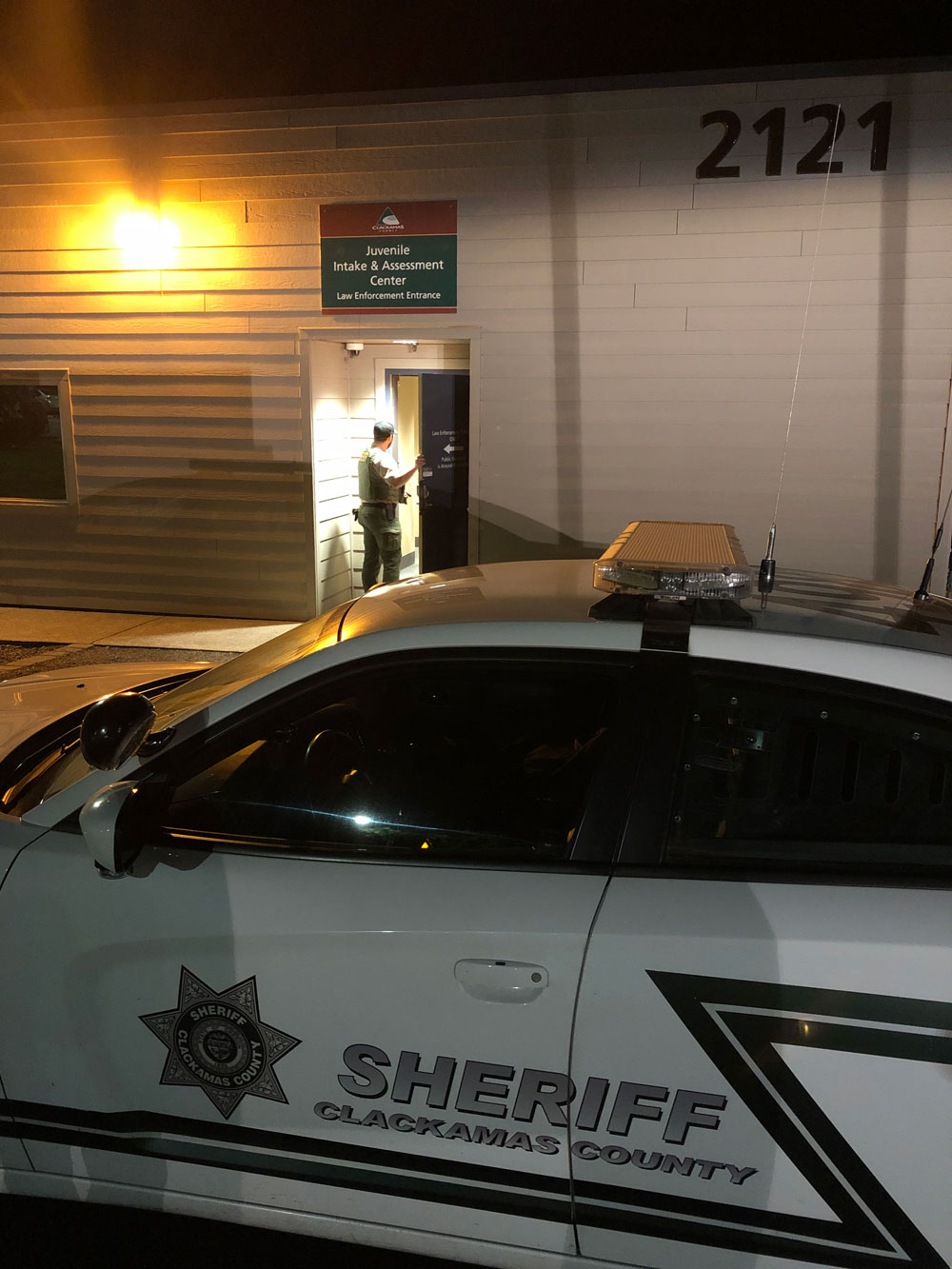 Thanks in part to a flood of tips from the public, authorities were able to quickly ID both the accomplice and suspect in the crime spree targeting Vista Market.

Authorities contacted the accomplice in the initial store theft, as well as the suspect in all three crimes. Both are juveniles.

Following an interview with detectives, the 16-year-old suspect in all three crimes was arrested early this morning and transported to the Clackamas County Juvenile & Intake Center. He will be charged with Robbery I, Robbery III and Theft II — with possible additional charges to be considered in the two violent assaults on store personnel.

A photo our of deputy delivering the main suspect to the Juvenile & Intake Center is attached.

The accomplice in the July 15 Theft II incident will be referred to juvenile services.

The Sheriff’s Office thanks the public for the tips that helped us make a speedy arrest in these cases. We are no longer seeing tips.

The Clackamas County Sheriff's Office is seeking tips in a string of robberies and assaults at a single Milwaukie convenience store.

All three incidents happened within an eight-week period at the Vista Market (14666 SE River Rd., Milwaukie).

The first incident involved shoplifting, with the suspect working with an apparent accomplice -- but the next two incidents included violent assaults of store personnel.

Authorities believe the same suspect may be involved in all three incidents.

Photos and video are available -- including photos of the suspect and also a possible accomplice to the crimes.

The three incidents are detailed below.

The first incident happened in the afternoon on Monday, July 15.

Vista Market personnel told deputies that a male suspect entered the store at approximately 3:22 p.m. The suspect headed to the store's smoking-pipes showcase, loaded a small black Nike bag with five or six pipes worth approximately $500, and fled the scene on a bicycle.

The suspect was described as a male wearing a dark hoodie with a white logo and light-colored basketball shorts. The hoodie was tied up all the way to his nose, concealing his face.

Authorities believe the suspect had an accomplice/lookout who cased the store a few minutes prior to the crime. The accomplice also briefly entered the store and lingered in the doorway during the crime. Surveillance footage clearly captured the face of this accomplice -- a young male with longer curly hair wearing a white hoodie with a large black logo, dark pants, and electric-blue sneakers.

Photos and video of the suspect and accomplice are attached and linked above.

The next incident was an armed robbery and assault on Wednesday, Aug. 28.

As seen in surveillance video, at approximately 10:02 a.m. on Wednesday, Aug. 28, a masked suspect entered the Vista Market, vaulted over the counter and robbed the storeowner at knifepoint. The suspect held a knife up to the storeowner's throat and demanded that the owner open the register. The suspect removed cash from the till and placed the knife on the counter. A struggle ensued. The suspect then assaulted the storeowner -- leaving the owner with a head laceration and other injuries -- and fled the scene with cash and glass pipes.

Surveillance photos of the suspect reveal the suspect was wearing a dark-blue Adidas hooded sweatshirt, dark pants or track pants, grey running shoes, what appears to be an untucked blue t-shirt under the hoodie, and a blue Adidas soccer or stadium backpack. The suspect appears to be a male in his teens or 20s, with a slim/fit build and dark hair.

The knife used in the robbery was recovered at the scene. A photo is attached.

Just after 11 a.m., a suspect wearing a dark hoodie, shorts, grey running shoes, and a ski mask pulled over his face -- and carrying the same make of Adidas backpack used in the Aug. 28 robbery -- entered the Vista Market.

The store clerk, realizing the store was about to be robbed again, stepped in the way of the suspect. The suspect ended up fighting with the clerk as the clerk attempted to push the suspect outside. The suspect fled the scene on foot. The clerk sustained cuts and bruises on his face during the altercation.

Surveillance footage captured a person resembling the suspect fleeing the scene on a bicycle around the time of the attempted robbery.

Photos of the suspect are attached, and video is linked above.

Detectives are seeking tips from the public as they work to identify the suspect in this case.

Anyone with information on these crimes is urged to contact the Sheriff’s Office Tip Line — by phone at 503-723-4949 or by using the online email form at https://www.clackamas.us/sheriff/tip. Please reference the following case numbers: