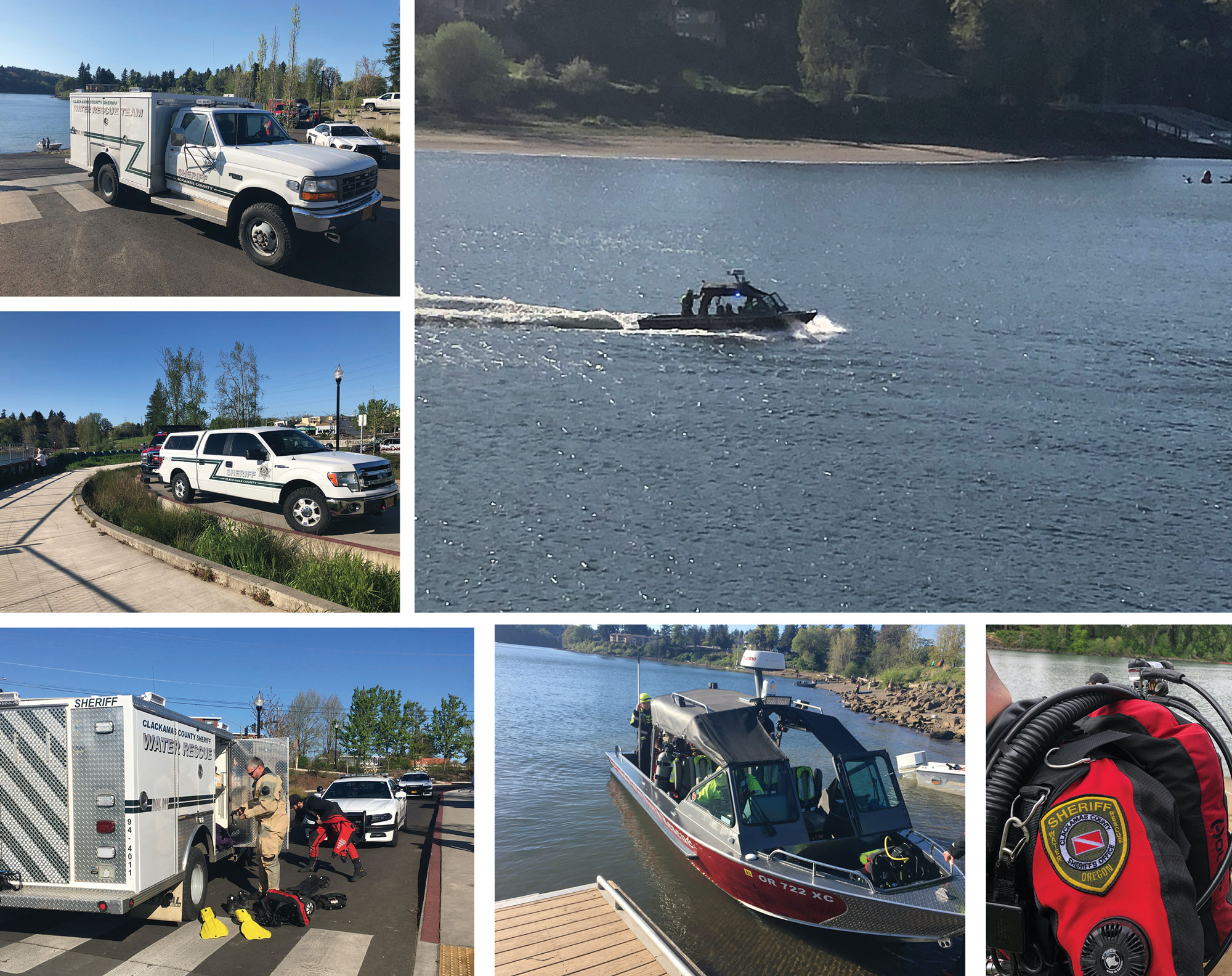 NOTE TO MEDIA: A B-roll reel of video -- including sound-bites from Gene Ralston of Ralston Underwater Search and Recovery -- is available at this Dropbox link.

With significant help from a private underwater search specialist, yesterday (Monday, April 27) the Sheriff's Office recovered the body of Saul Gallegos Ruiz from the Willamette River near Elk Island.

Members of the Sheriff's Office Marine Unit and Dive/Rescue Team have been working Monday with Gene and Sandy Ralston of Ralston Underwater Search and Recovery. The Ralstons, of Idaho, came to assist with the search effort at the request of Gallegos Ruiz's family.

The Ralstons have a remarkable success rate in these sorts of search operations. Gene and Sandy Ralston deploy a boat outfitted with nearly $300,000 worth of specialized equipment to aid in the search for bodies underwater.

Two media profiles of the Ralstons:

The decision was made to send divers in the water at about 7 p.m. on Monday evening to attempt the recovery. Divers were called to the Jefferson Boat Ramp in Milwaukie, where they were met by the Sheriff’s Office Marine Unit to take them to the dive location where the body was found.

The divers recovered the body at a depth of about 75 feet. The current added to the difficulty of the recovery, as did lighting conditions on the surface as the sun went down.

The Gallegos Ruiz family was aware of the search update, and at least a hundred family members and friends were present at the Milwaukie boat ramp during the recovery operation.

A Clackamas County deputy medical examiner also responded to the scene. Positive identification of Saul Gallegos Ruiz's body was made at the boat ramp.

Milwaukie Police officers were also present and assisted at the boat ramp. Milwaukie PD has provided considerable support to the family since the April 16 disappearance of Gallegos Ruiz after the kayaking accident. The Sheriff's Office appreciates the support of Milwaukie PD, West Linn PD, Oregon City PD, Ralston Underwater Search and Recovery, and friends and family of Saul Gallegos Ruiz during this complex search and recovery operation.

The Clackamas County Sheriff’s Office Search and Rescue, Marine Unit and the Dive/Rescue team, with support from TVF&R and Gladstone Fire, continued to search for Ruiz throughout the day Monday (April 20). Unfortunately, at this writing, his body has not yet been located.

Moving forward, the Marine Unit will continue to use side-scan during its patrols, and plans to request divers to follow up on any leads generated during patrols.

There are many factors that make this recovery operation challenging -- including changing tides, currents, the large search area and hazards faced by the divers. The Marine Unit and Dive/Rescue team thank the Ruiz family for their ongoing support during this challenging recovery effort.

The teams will use sonar equipment to scan additional areas of the Willamette River near Elk Rock and use divers to search.  This additional effort is expected to conclude this evening.

The Clackamas County Water Rescue Consortium was out on the Willamette River in the Elk Rock area continuing to search for the subject until 11 p.m. on Thursday night (April 16). On Friday (April 17), they resumed their recovery mission at 8 a.m. and concluded operations at 5 p.m. -- having deployed personnel from the Clackamas County Dive Rescue Team, Multnomah County Sheriff’s Office, Clackamas Fire District #1, Lake Oswego Fire, and Tualatin Valley Fire & Rescue.

The Consortium used multiple search techniques, including divers. Unfortunately, they were unable to locate the body of the subject.

After careful consideration, the recovery mission was suspended.

The subject believed drowned has been identified as Saul Gallegos Ruiz, 27, of Happy Valley.

The family of the victim has asked for privacy at this time.

At about 4:23 p.m. on Thursday, April 16, 2020, several people called 911 dispatch to report a kayaker in distress near Elk Rock on the Willamette River.

Callers reported an adult male had fallen in the water as his kayak flipped. The man was not wearing a life jacket.

Several people recreating on the river went to help the man, but by the time they were able to reach his location, he had submerged and they couldn't locate him.

The Coast Guard deployed a boat to the location, and at this writing Milwaukie Police are assisting at the Jefferson Street Boat Ramp. The Multnomah County Sheriff's Office just arrived at the scene with a boat and additional divers.

Considering the information from eyewitnesses and the amount of time that has elapsed since the man was last seen, authorities are presuming he has drowned. Rescuers are currently conducting a recovery mission, and divers are preparing to search for the subject’s body.

The identity of the subject is still being determined. This mission is active -- we will update this release when we have additional information.