Following are updated patrol stats (as of Monday morning) for evacuation Level 2 and 3 fire zones (encompassing ares of Clackamas County including South County, East County, Metro, and the City of Estacada):

From midnight on Sept. 8 at to 6 a.m. on Sept. 21 (14 days, 6 hours), deputies made 21 arrests in Level 2 and Level 3 evacuation zones, with some suspects booked on multiple charges including:

(For comparison, during the same time period in 2019, deputies made 13 arrests in these same patrol areas, completed 16 crime reports, engaged in 148 self-initiated activities and made 28 welfare checks and follow-ups.)

Dropbox link with photos and videos from patrol cases:
https://www.dropbox.com/sh/19kyfmzmmv52yu1/AABvQ4qREfRTSuaHqOH3eyQMa?dl=0

Clackamas County Sheriff's Office deputies continue to step up their patrols of impacted areas and evacuated zones during the #ClackamasWildfires.

13 arrests in Level 2 and Level 3 evacuation zones, with some suspects booked on multiple charges including:

Here are details on a few more recent calls from the enhanced fire-zone patrols:

A property owner off S. Marquam Circle, south of Molalla, called to report a suspicious car parked on his property when he showed up to check on his place.

The suspicious vehicle -- a blue Ford Focus sedan -- ended up being a stolen car out of Molalla.

Sometime between Sept. 10 and Sept. 12, the Ford had been stolen from a Molalla residence while the owner was evacuated. The owner had returned to her residence to find her vehicle missing.

The vehicle was returned to its owner.

There are currently no suspects in this case. Anyone with tips is encouraged to contact us using the Sheriff's Office Tip Line at 503-723-4949 or https://www.clackamas.us/sheriff/tip -- please reference CCSO Case # 20-019642.

Photos of the car recovery are in the Dropbox folder.

On the morning of Sunday, Sept. 13, deputies were dispatched to a report of a suspicious vehicle in the area of S. Springwater Rd. near S. Feldheimer Rd., in the Level 3 evacuation area. The vehicle was reported to have gas cans on its exterior, and was occupied by two white males who were not known to the reporting party.

A deputy patrolling the area located the vehicle driving on S. Springwater Road, and initiated a traffic stop for a faulty brake light. The driver slowly came to a stop.

As the deputy approached the vehicle on foot, the driver rapidly drove away in an attempt to flee.

Other patrol units in the area responded to assist with the pursuit. An Oregon State Police trooper was able to deploy spike strips -- a device used to safely deflate the suspect vehicle's tires -- in an attempt to bring the pursuit to a stop.

As the vehicle continued fleeing, a deputy attempted a Pursuit Intervention Technique (PIT) maneuver -- an intentional spinning of the vehicle to cause it to stop -- which was unsuccessful. However, it apparently encouraged the driver to abandon his flight, as he stopped his vehicle and surrendered.

The driver stated he fled because he was scared and believed he had a warrant for his arrest. He said he was in the area to help his dad move, but was unable to provide his dad's address.

A search of the vehicle revealed heroin, methamphetamine, drug paraphernalia, a dagger, an air-powered pistol replica, an assortment of shaved vehicle keys, and a single firework, as well as various hand and power tools.

Both subjects were transported to an area hospital for treatment of pre-existing medical conditions.

The passenger -- Justin Valente, 32, of Portland -- was charged with:

Photos from the arrest are in the above-linked Dropbox folder.

In the afternoon on Sept. 15, deputies responded to a report of a suspicious vehicle -- a white Ford Taurus pulling into multiple driveways in the Spangler Road / Beavercreek Road area in Beavercreek.

Deputies located the suspicious white Taurus off Hwy. 213, in Wagon Wheel Park. The vehicle's tags were expired and its passenger taillight was out.

In the vehicle: Paul Theodore Nichols, 32, and Taleina Renee Johnson, 32. Both are well-known to local authorities.

In the back seat: a Stihl leaf-blower, sitting on a number of bags.

K9 Grimm was present at the call, and is trained and certified to detect the odors of cocaine, heroin and methamphetamine. Grimm alerted on the vehicle. Deputies quickly located methamphetamine in Ms. Johnson's purse.

Meanwhile, Mr. Nichols turned out to be in possession of a stolen Pacific Pride gas card and heroin.

Also, the leaf-blower turned out to be stolen -- possibly part of a spate of yard-tool thefts in the area during the county's state of emergency.

Paul Nichols and Ms. Johnson were transported by Parole & Probation to the Clackamas County Jail without incident, and the vehicle was towed.

Photos from the arrest are in the above-linked Dropbox folder. If you know of any other criminal activity involving Nichols or Johnson, contact the Sheriff's Office Tip Line at 503-723-4949 or https://www.clackamas.us/sheriff/tip , referencing CCSO Case # 20-019802.

Dropbox link with photos and videos from patrol cases:
https://www.dropbox.com/sh/19kyfmzmmv52yu1/AABvQ4qREfRTSuaHqOH3eyQMa?dl=0 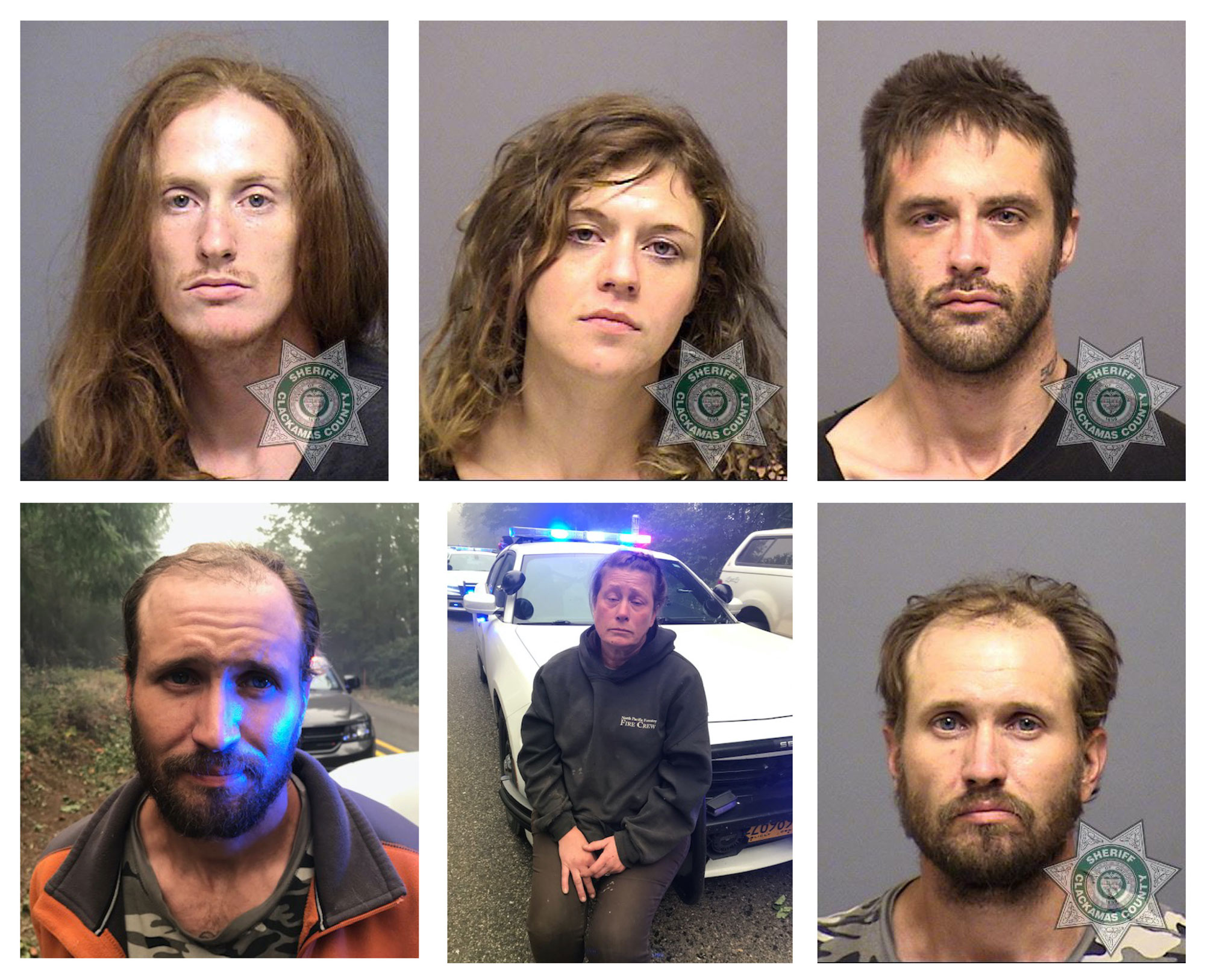 Clackamas County Sheriff's Office deputies continue to step up their patrols of impacted areas and evacuated zones during the #ClackamasWildfires, watching for potential burglaries and other criminal activity as they work to keep the county safe.

From Sept. 8-10, deputies responded to nearly 330 calls in the county's Level 2 and Level 3 fire areas. This is a 405% increase over the number of calls fielded on Sept. 5-7. Most of these calls are related to reports of suspicious vehicles and people and concerns about potential burglaries. The vast majority were determined to be non-criminal in nature.

From Sept. 5-10, the increased patrols in Level 2 and Level 3 fire areas resulted in the following totals:

Here's a roundup of a few recent arrests. Photos from all three cases are in the above-linked Dropbox folder.

The couple got a flat tire on the trailer they were using to help others. They unhooked the trailer and went to get supplies to fix the tire, leaving the trailer on Judd Road in Eagle Creek.

While they were gone, two suspects -- Buck Adam Nickel, 41, of Estacada, and Kimberlee Tipton, 52, of Milwaukie -- found the trailer and decided to help themselves.

Our deputy contacted the suspects -- and quickly learned they were in the middle of stealing the trailer. The male suspect also had a concealed .357 handgun.

Buck Nickel was arrested for Theft I and Felon in Possession of a Firearm. His bail was set at $12,500. A booking photo is in the Dropbox folder.

Kimberlee Tipton was cited for Theft I.

The owners of the trailer were reportedly very happy when they arrived back at the scene and saw the suspects in custody.

Just before 11 a.m. on Thursday, Sept. 10, an Estacada resident called to report a maroon SUV with three passengers in his driveway near Rainbow Road, in a rural part of Clackamas County. The subjects fled the scene when confronted.

While en route to the scene, our deputies spotted the suspect maroon SUV leaving the area around 11:21 a.m. The deputy stopped the vehicle near SE Coupland Road and SE Porter Road.

Two men and a woman were in the vehicle.

The driver -- Trevor Irish, 42 -- had a suspended license for unpaid tickets. He was cited.

The front passenger -- Andrew Eric Roberts-Nichols, 32, was found to be in possession of heroin. He was also on probation for mail theft. He was arrested and transported to Clackamas County Jail on a felony heroin charge. A booking photo is in the Dropbox folder, as well as video from the arrest.

Back-seat passenger Holly Fawn Fay, 32, was cited for heroin possession and a warrant for possession of methamphetamine. She was also on probation for a drug conviction.

Methamphetamine and drug paraphernalia were also found in the SUV.

The SUV was towed.

In the afternoon on Sept. 11, deputies on enhanced patrols were dispatched to a report of two suspicious individuals possibly walking onto a property on Ringo Road, near Mulino.

After an investigation, deputies determined that Shotwell and Lenox had stolen two gas-powered generators, a box of hand tools including a cordless drill, two leaf blowers, and at least one gas can from a neighboring property.

Shotwell and Lenox were each arrested and transported to Clackamas County Jail on charges of Theft I and Burglary II. Booking photos are in the Dropbox folder.

During the call, a stolen John Deere Gator side-by-side utility vehicle was also located in a nearby wooded area. Shotwell had the key to this stolen utility vehicle in his pocket. The John Deere had been stolen out of Molalla, and Molalla PDmade an additional arrest of another suspect in that case: Duane Schlip, 56, of Molalla.

More stolen property has also been located at the address, including a Polaris Ranger side-by-side utility vehicle. Deputies are currently seeking to reunite stolen items with victims; contact the Sheriff's Office at 503-655-8211 or 503-723-4949(referencing CCSO Case # 20-019516) if you're missing a Polaris Ranger side-by-side or have had other property recently stolen in the area.

Photos and video from the three cases can be found in this Dropbox folder:
https://www.dropbox.com/sh/19kyfmzmmv52yu1/AABvQ4qREfRTSuaHqOH3eyQMa?dl=0