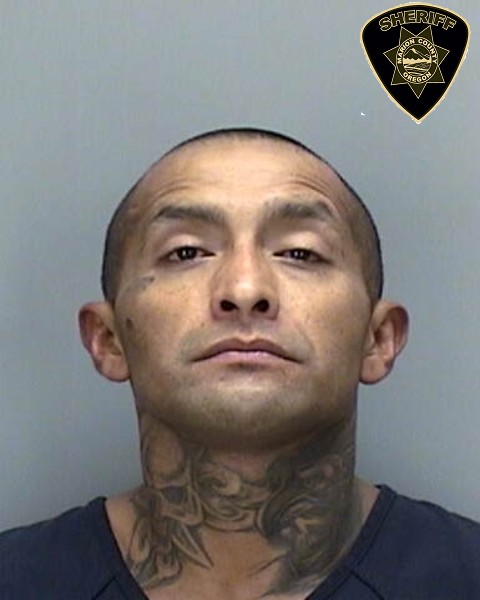 On the morning of Sunday, Sept. 13, a deputy contracted to Wilsonville Police was on patrol when he observed a male along the side of SW Boones Ferry Rd. near SW Nike Dr.

The deputy noticed the man was acting strangely and had a belt around his neck.

The deputy attempted to contact the man in order to do a welfare check, but the male was uncooperative.

While checking if the man was okay, the deputy noticed a distinctive tattoo on the man's face. The deputy recalled a recent information bulletin out of Woodburn, OR for a murder suspect with a matching face tattoo.

The deputy identified the male as being the wanted murder suspect: Isidro Patricio Aguilera Jr., 38, of Woodburn.

The deputy confirmed that Mr. Aguilera had a warrant for Murder, Unlawful Use of a Weapon, and Felon in Possession of a Firearm out of Marion County, Oregon.

Mr. Aguilera was arrested for his outstanding warrant and transported to Clackamas County Jail. He is currently housed in Marion County Jail; his booking photo is attached. Complete booking info is here: https://apps.co.marion.or.us/jailrosters/mccf_roster.html#

Please direct all follow-up questions to the Woodburn Police Department. Their original press release on Isidro Patricio Aguilera Jr. can be found below:

The Woodburn Police Department is asking anyone with information about Aguilera Jr.’s whereabouts since September 5, 2020, to contact Woodburn police at 503-982-2345.

Wednesday, September 9, 2020 - Woodburn, OR - On September 5, at 11:45 P.M., the Woodburn Police Department (WPD) responded to a report of a shooting in the 200 block of Oswald Street in Woodburn. Officers arrived and found a 27-year-old male, later identified as Javier Montes-Reyes, who had been shot and was pronounced deceased at the scene. The suspect in the homicide has been identified as 38-year-old Isidro Aguilar Jr. (Photo included)

WPD is asking anyone with information about the case or Aguilar’s whereabouts to contact Woodburn Police at 503-982-2345.

Sunday,  September 6, 2020 - Woodburn,  OR - On September 5, at 11:45 P.M., the Woodburn Police Department (WPD) responded to a report of a shooting victim at the 200 block of Oswald Street in Woodburn.  Officers arrived and found a deceased adult male at the location.  The suspect in the shooting had fled the scene prior to police arrival.  This is an active investigation and WPD is being assisted by the Marion County District Attorney’s Office and Marion County Medical-Legal Death Investigators.

WPD is asking anyone with information to contact the department at 503-982-2345.