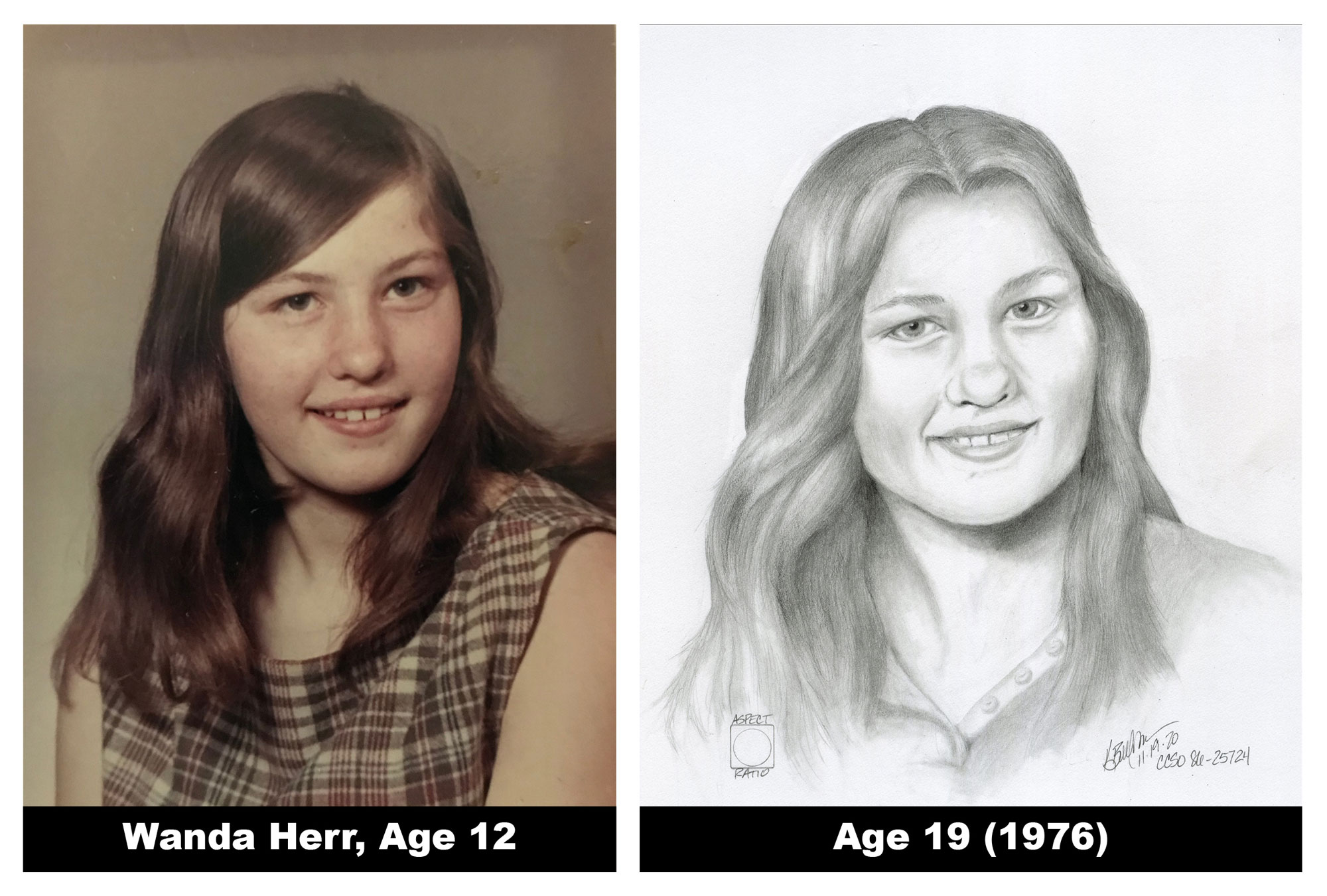 Detectives working with a forensic artist have produced the attached age-progressed sketch of Wanda Herr.

The drawing approximates how Wanda might have looked at age 19 in 1976, when she disappeared.

Our October release on this cold case is below. Anyone who knew Wanda Ann Herr, her associates or her whereabouts in the 1970s  is urged to contact the Sheriff’s Office Tip Line — by phone at 503-723-4949 or by using the online email form at https://www.clackamas.us/sheriff/tip. Please reference CCSO Case # 86-025724.

Earlier this year, genetic and genealogical investigators finally identified the skull as belonging to 19-year-old Wanda Ann Herr. Today, the Clackamas County Sheriff's Office is asking for the public's help as it resurrects a decades-old cold case -- and investigates Wanda's mysterious disappearance and death in the late 1970s.

Eleven days later, an Oregon State Police forensic examiner determined the skull likely belonged to a twentysomething woman or small man. He also estimated the skull had been in the woods approximately 10 years -- putting the subject's death on or around 1976.

In 2005, the remains were re-inventoried and re-curated at the Clackamas County Medical Examiner's Office. But the case otherwise lay dormant until 2008, nearly 22 years after the initial find, when Dr. Nici Vance -- the State Forensic Anthropologist with the Oregon State Police -- re-examined the skull. This, combined with DNA analysis of the skull at the University of North Texas, allowed for a refined victim description: The skull belonged to a female in her late teens to early 20s.

That same year, 2008, Sheriff's Office Forensic Imaging Specialist Joyce Nagy completed a facial reconstruction from the skull, in clay. The task was complicated by the partial remains: The lower half of the skull was missing. The reconstruction nevertheless generated a number of tips, but no solid leads.

The DNA profile of the skull was then uploaded into the Combined DNA Index System (CODIS) and the case was entered into the National Missing and Unidentified Persons System (NamUs). But the trail remained cold.

In January 2019, the Oregon State Medical Examiner's Office received National Institute of Justice (NIJ) grant funds to perform forensic genetic genealogy and DNA phenotyping on 100 unidentified human skeletal remains cases. This combination of intensive genetic analysis and in-depth genealogical legwork was made famous as the process used to track down the Golden State Killer in 2018.

DNA phenotyping predicts the physical appearance and ancestry of an unknown person from their DNA; genetic genealogy can help identify an unknown person by searching for relatives in public databases and building family trees.

The Government Camp skull was among those sent out for the grant-funded investigation. It was also the first to produce a major finding.

First, the University of North Texas flagged the skull as having an existing DNA extract with extensive genetic information. Then, in December 2019, Parabon Nanolabs received the DNA extract and subjected it to in-depth genetic genealogy and DNA phenotyping.

The intensive genetic analysis revealed far more detail about the subject: The skull belonged to a female of Northern European descent with fair skin, hazel/brown eyes, brown hair, and some freckles.

Detectives obtained Wanda's birth certificate and contacted her surviving sisters. Further DNA testing with the cooperation of the sisters confirmed it: The partial skull was that of Wanda Herr.

Based on interviews with the sisters, Wanda is believed to have disappeared sometime after June 1976, when she was 19 years old. At the time she may have been living in a group home in the Gresham area.

Info about Wanda is scarce. She was raised in a different household than her sisters. Though detectives believe she was a chronic runaway based on interviews, there are no records of Wanda as a runaway or missing person. She had no DMV record, no bank account, and there are no police reports that mention her. Attached is a photo of Wanda taken when she was just 12 years old -- seven years before her disappearance.

Detectives are working to discover more of her story -- and learn what led to her disappearance and death. If you knew or met Wanda in the 1970s, detectives want to hear from you.

Anyone who knew Wanda Ann Herr, her associates or her whereabouts in the 1970s  is urged to contact the Sheriff’s Office Tip Line — by phone at 503-723-4949 or by using the online email form at https://www.clackamas.us/sheriff/tip. Please reference CCSO Case # 86-025724.