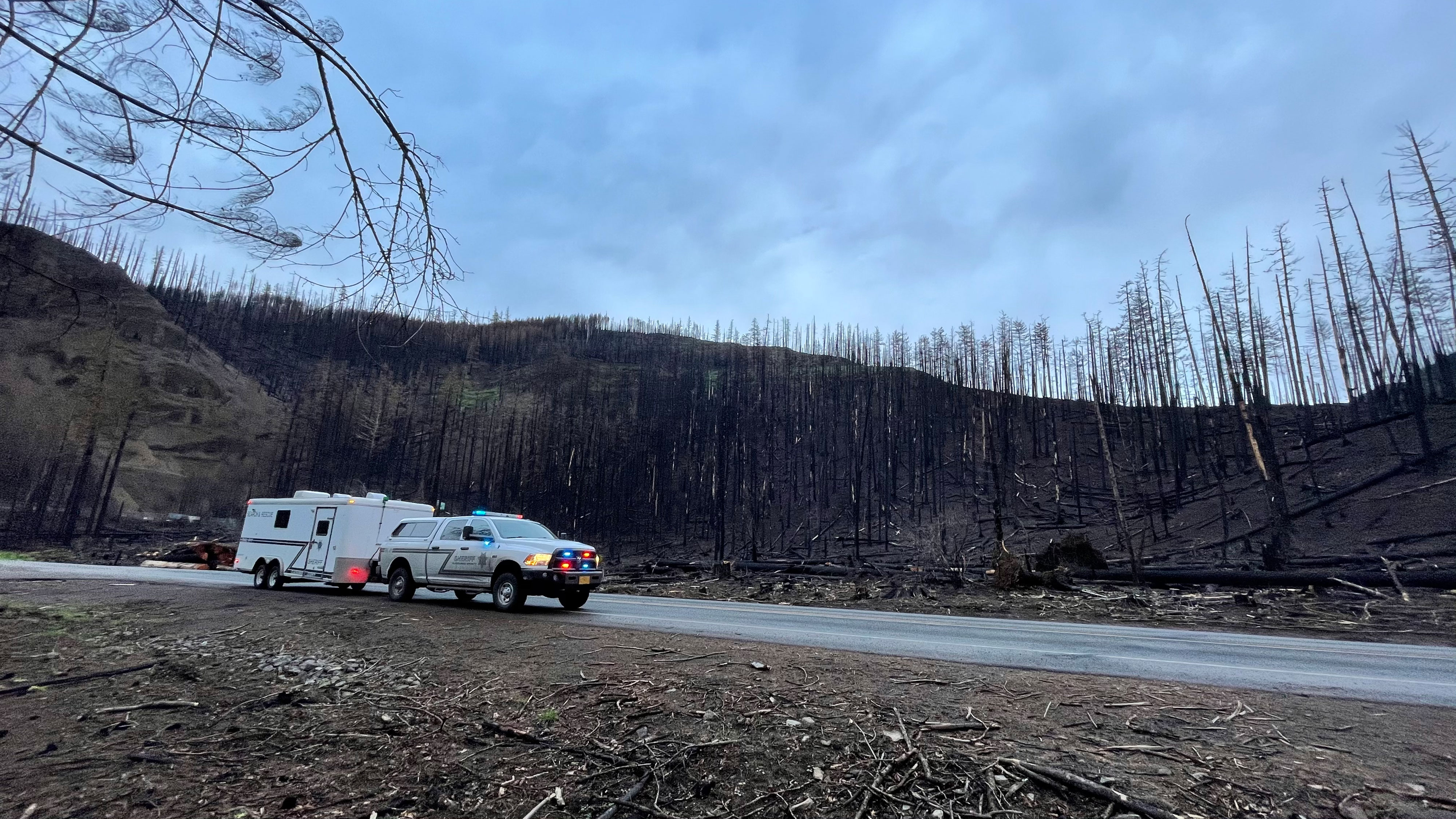 The Sabin family is asking for privacy at this time, but would like to thank all who have expressed their support. Jared is survived by his wife and three children. Gavyn is survived by his mother, his three siblings, and his fiancée.

A verified GoFundMe account has been established for the Sabin family here: https://www.gofundme.com/f/bonnie-amp-charlene-sabin

As SAR Coordinators planned possible Friday (Nov. 20) efforts with PMR, the Hood River Crag Rats, and CSAR, the 304th Pararescue Squadron with the U.S. Air Force Reserve Command was in the air, in a Navy helicopter that deployed out of Naval Air Station Whidbey Island.

The weather was deteriorating as the day passed, but the Navy chopper dropped 304th pararescue personnel near possible wreckage spotted earlier in the Fish Creek area.

Rescuers on the ground reached the wreckage around 2 p.m. It was, in fact, the crash site for the Cessna 150, and the remains of two deceased men were located at the scene.

Rescue crews documented the scene and extracted the deceased, then met with a Clackamas County Deputy Medical Examiner, who took possession of the remains.

The Clackamas County Medical Examiner's Office is expected to conduct autopsies today (Friday, Nov. 20) to identify the remains. Family notifications will then be completed.

The Clackamas County Sheriff’s Office would like to the thank all the crews who helped on this difficult recovery mission:

Deputies and CSAR volunteers worked to clear fallen trees from roads in an attempt to find a viable access point where ground search crews could access the search location. Crews spent the day cutting and clearing nearly 30 large trees and sent a ground crew in the field.  They were able to clear about 14 miles of road and about two miles of trail.

Photos from this trail-clearing effort are attached. B-roll video of the clearing effort can be downloaded here:
https://www.dropbox.com/s/lfqkflx2o1mfnc9/2020-11-19-SARCrewsClearRoad.mp4?dl=0

Conditions for search crews remain harsh -- with cold weather, rain, snow and wind adding to the hazards in this wildfire-devastated area. Searchers reported having to move through 8-12 inches of snow at times. New aerial photos of the search area are attached, revealing the complexity and devastation of the terrain.

The 304th Pararescue Squadron with the U.S. Air Force Reserve Command joined the mission yesterday. Parajumpers flew to the wilderness area in a U.S. Navy helicopter out of Whidbey Island, WA. However, the chopper crew had to cease operations due to weather conditions, and the pararescue crew could not deploy to the ground last night owing to strong winds.

Today (Thursday, Nov. 19), Whidbey Island Naval Air Station once again has a Navy chopper in the air and this afternoon will once again attempt to drop pararescue personnel into the wilderness to investigate a possible wreckage sighting by the Oregon Air Guard.

Other searchers have been in the field since 8 a.m. Thursday morning.

SAR Coordinators are already preparing for Friday, Nov. 19 -- planning to deploy personnel from CSAR, Portland Mountain Rescue, and the Crag Rats into the field as needed.

This is an ongoing mission. Updates will be posted when available. There is no staging location for media at this time.

Just after 6 a.m. on Monday, Nov. 16, 2020, the Clackamas County Sheriff's Office was made aware of concerns from aircraft controllers that a small plane may have crashed in a remote area of the Mt. Hood National Forest in Clackamas County.

The Cessna 150 had left Salem, Oregon that morning; the pilot planned to stop in Troutdale before continuing on to Idaho and then Utah.

The pilot reported having trouble due to bad weather, and reported that ice was beginning to form on the plane. The pilot expressed his intent to change destinations; aircraft controllers lost contact with the plane a few minutes later.

Sheriff's Office Search & Rescue (SAR) Coordinators launched a mission to locate and then respond to the presumed crash scene -- enlisting help from:

The mission has presented several complex factors -- including pinpointing the plane's exact location and navigating the complex, wildfire-damaged terrain.

Limited coordinates place the aircraft in the likely general area of Fish Creek, an area affected by the unprecedented September wildfires.

On Tuesday, Nov. 17, a CSAR hasty team attempted to reach the area the plane is believed to have crashed: in the Fish Creek Basin, approximately seven miles from the closest access point. This is considered one of the more difficult wilderness areas to reach in Clackamas County, and wildfire damage has left the area additionally hazardous and difficult to navigate; challenges include an approximate 7,000-foot elevation gain, land and rock slides, fallen trees, and a lack of a navigable trail system. The hasty team was not able to reach the site on Tuesday due to these adverse conditions.

Today (Wednesday, Nov. 18), search-and-rescue personnel tried to locate a better access point to the likely crash location using 4x4 vehicles, but were unsuccessful.  A request went out to the 304th Pararescue Squadron with the U.S. Air Force Reserve Command. At this writing, a U.S. Navy helicopter will soon deploy out of Whidbey Island, WA to pick up the pararescue crew and drop them in the wilderness in another attempt to locate the crash and any casualties or survivors.

At this writing, searchers have yet to spot any confirmed wreckage, despite drone and aircraft surveys of the area. There are currently six likely candidates for a crash area, based on possible final coordinates submitted by Seattle Center air-traffic controllers.

Missing are a father and son: Jared Scott Sabin, 44, and Gavyn Scott Sabin, 19, both of Salem. It is unknown at this time who was piloting the missing aircraft.

This is an ongoing mission. Updates will be posted when available.

Photos from the search are attached.

There is no staging location for media at this time.