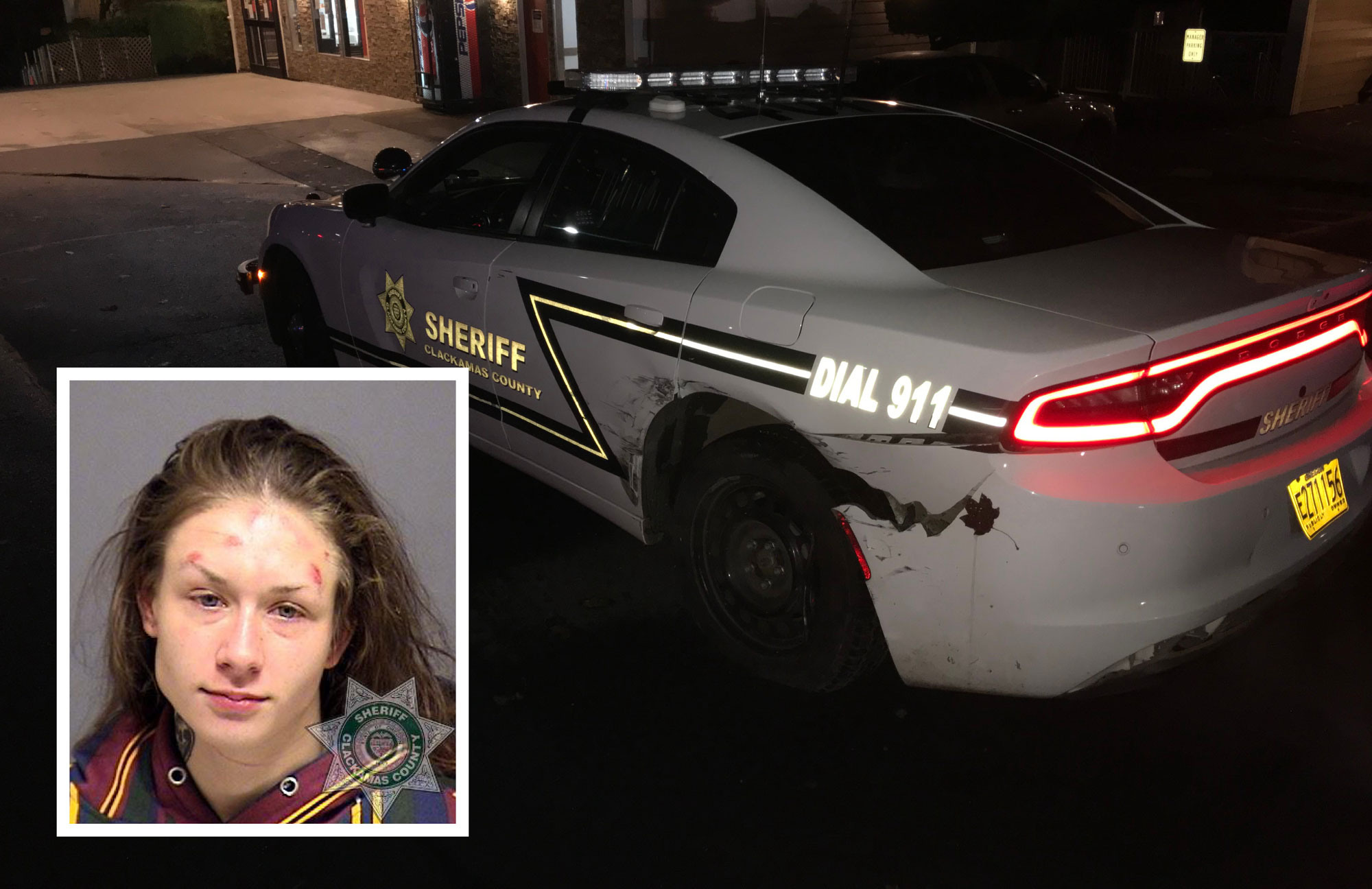 Just after midnight on Monday, Nov. 16, 2020, a Clackamas County Sheriff's Office deputy noticed an occupied Mitsubishi sedan parked in a handicap space at the Sunnyside Inn and Suites, located at 12855 SE 97th Ave in Clackamas.

The deputy also ran the vehicle's license plates. They were not associated with the car. The plates belonged with a Subaru, not a Mitsubishi.

The deputy parked and approached the vehicle. Two women were inside. The deputy contacted the driver -- later identified as Madison Taylor Carden, 23, of Milwaukie -- and spoke with her at the driver's window.

The deputy noticed other abnormalities. The car's Vehicle Identification Number (VIN) on the car's dashboard was covered, and the deputy could smell fresh paint, as if the vehicle had recently been spray-painted.

The deputy asked Ms. Taylor Carden for identification. She responded by abruptly starting the Mitsubishi and throwing it in reverse -- backing into the deputy's patrol car before attempting to flee southbound in the suspect car.

The deputy saw there wasn't an exit out of the Sunnyside Inn and Suites parking lot to the south. The deputy knew the suspect driver would likely drive back to the north to make a getaway -- passing by the deputy again on the way.

Thinking fast, the deputy grabbed some spike strips from his patrol car and waited for her likely return approach.

Ms. Taylor Carden was indeed forced to turn around, heading back in the deputy's general direction.

As she approached, the deputy pulled his spike strips in front of her vehicle.

The spike deployment was successful -- the Mitsubishi's tires were punctured -- but the suspect also hit the deputy's patrol car a second time before continuing northbound through the parking lot.

However, before Ms. Taylor Carden could flee the lot, another deputy arrived in a second patrol car -- pinning the fleeing vehicle after it struck a truck in the parking lot.

The initial deputy ran across the parking lot to where the vehicle was stopped. Ms. Taylor Carden had by this point climbed out of the window and was attempting to flee on foot. The deputy took her into custody.

Further investigation revealed the car had in fact been reported stolen out of Gresham. A search of the vehicle and suspect further revealed methamphetamine, LSD, drug paraphernalia, the original license plates for the vehicle, and a pair of brass knuckles.

Madison Taylor-Carden was booked at the Clackamas County Jail for a Parole Violation warrant, Unauthorized Use of a Vehicle, Attempt to Elude, Reckless Driving, Reckless Endangering, Hit and Run, Felon in Possession of a Restricted Weapon, and Possession of Methamphetamine. Bail was set at $50,000. Complete booking info is here: https://web3.clackamas.us/roster/#inmates  A booking photo is attached.

B-roll video of surveillance and dash-cam video from the incident is here:
https://www.dropbox.com/s/qedfaobpx8szhnm/20201116_Parking%20lot%20spike_Media%20Release.mp4?dl=0