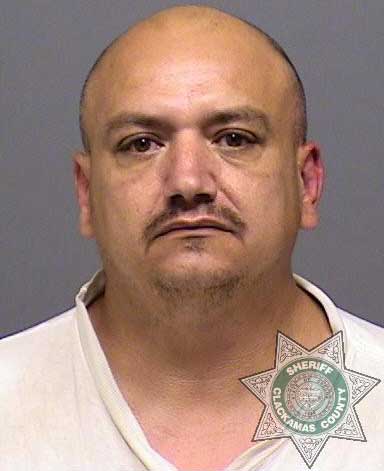 Clackamas County Sheriff's Office detectives were able to identify the suspect in this case as Billy Lee Rodriguez, 43, of Woodburn, OR. This information was passed along to law-enforcement agencies, including the Woodburn Police Department.

Detectives learned the location of stolen truck, and are in the process of recovering it now. The truck will be processed for further evidence.

Rodriguez will be booked at the Clackamas County Jail on the charges of Robbery II and Unlawful Use of a Motor Vehicle. Bail is set at $250,000. His booking info is here.

At this point in the investigation (Friday, Sept. 13), the motorized scooter that the victim relies upon is still missing and reported as a stolen item. If you have any information regarding this case, please contact the Clackamas County Sheriff's Office.

The Clackamas County Sheriff's Office responded to a report of a suspect who assaulted a 79-year-old man at his Woodburn home and stole the victim's wallet and truck -- a truck that was carrying the victim's motorized wheelchair. The Sheriff's Office is seeking tips from the public as they search for the subject and stolen truck.

At approximately 6 p.m. Thursday, Sept. 10, a heavy-set white male -- who had reportedly been sweating profusely and was very dirty -- walked up to James Madsen, 79, at his Woodburn home. The suspect reportedly asked if Madsen had some gas for his car that had allegedly broke down. Mr. Madsen didn't have any -- but offered to take the man into the town of Monitor to get some gas for his car.

Mr. Madsen told authorities he went inside the house and got his wallet and keys and escorted the man out to Madsen's truck and prepared to give him a ride.

Mr. Madsen said as he was about to get into his truck, the suspect grabbed him from behind, wrestled him to the ground, and stole his truck keys and wallet out of his hands before stealing the truck.

Mr. Madsen is handicapped -- and inside the stolen dark-blue 2013 Ford F-150 with Oregon License Plate 028GFB was a red-and-black motorized wheelchair that Madsen relies heavily on for getting around.

Mr. Madsen was not injured during the scuffle, and would really like to get his truck and wheelchair back.

The Clackamas County Sheriff's Office is seeking the public's help to find the stolen truck and wheelchair and make an arrest in the case. If you see the truck or know the suspect, call 911. Do not contact the suspect.

The public can also submit crime-tip text messages to the Clackamas County Sheriff's Office from a cell phone. All users have to do is send a text message to CRIMES (274637 on your phone keypad) -- with the keyword CCSO as the first word in the message body.

Important reminder: Please do not send emergency messages using the text-messaging system -- in case of an emergency, call 911.