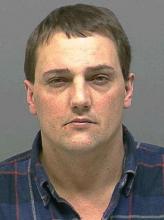 Mr. Sperb left behind his wallet and identification and all other belongings. Foul play is suspected.