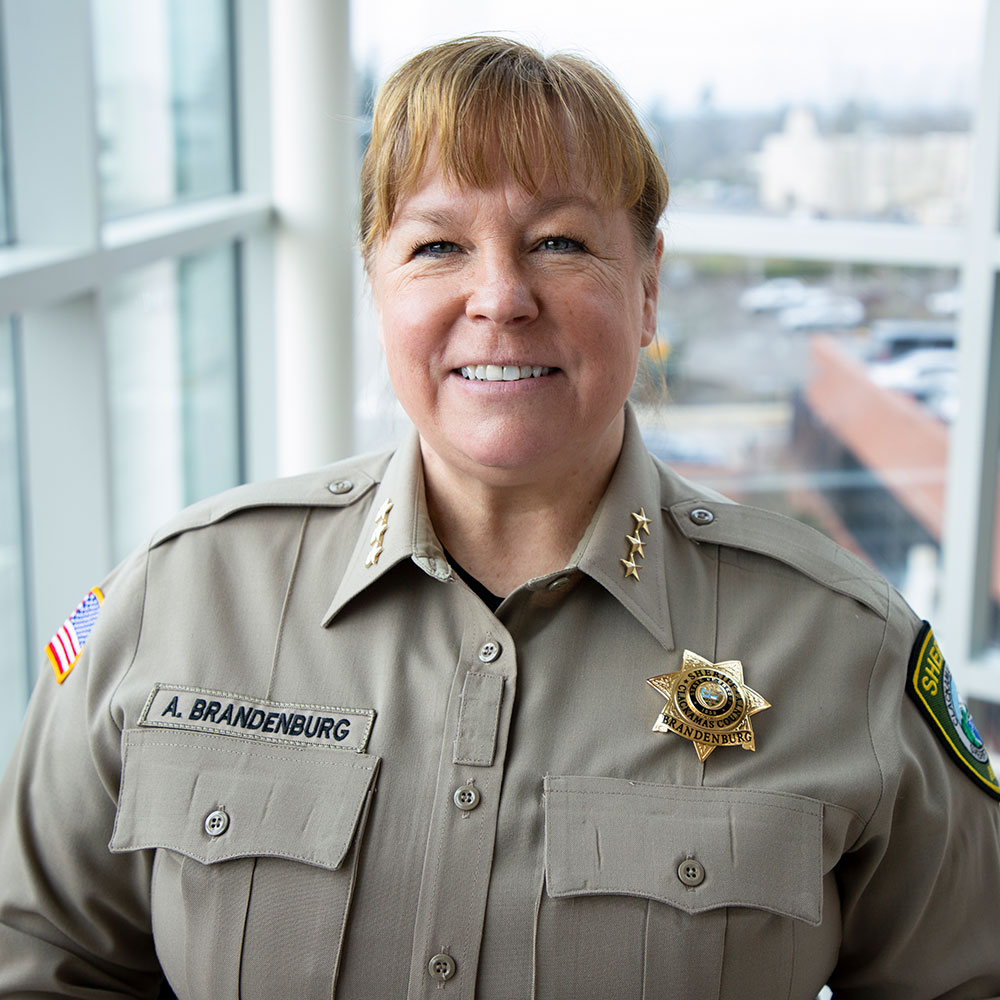 Sheriff Angela Brandenburg is the county's 33rd sheriff since William Livingston Holmes first took up the post in 1845.

Sheriff Brandenburg has served with the Clackamas County Sheriff’s Office for over 30 years. She is also a veteran who served nine years in the Oregon Army National Guard. During her career at the Sheriff’s Office, Sheriff Brandenburg has served in a variety of capacities. She has worked as a Reserve Deputy, Patrol Deputy, Civil Deputy, Patrol Sergeant, Civil Sergeant and Civil Commander Lieutenant. She also spent five years as the Public Information Officer, was a member of both Search & Rescue and the SWAT Team, and a Patrol Field Training Officer.

Before taking over as Undersheriff in February 2019, Brandenburg served for five years as the Director of A Safe Place Family Justice Center, and led CCSO's Domestic Violence Enhanced Response Team (DVERT).

She won the Office during the May 2020 Clackamas County primary, and lives in Molalla with her husband and two children. 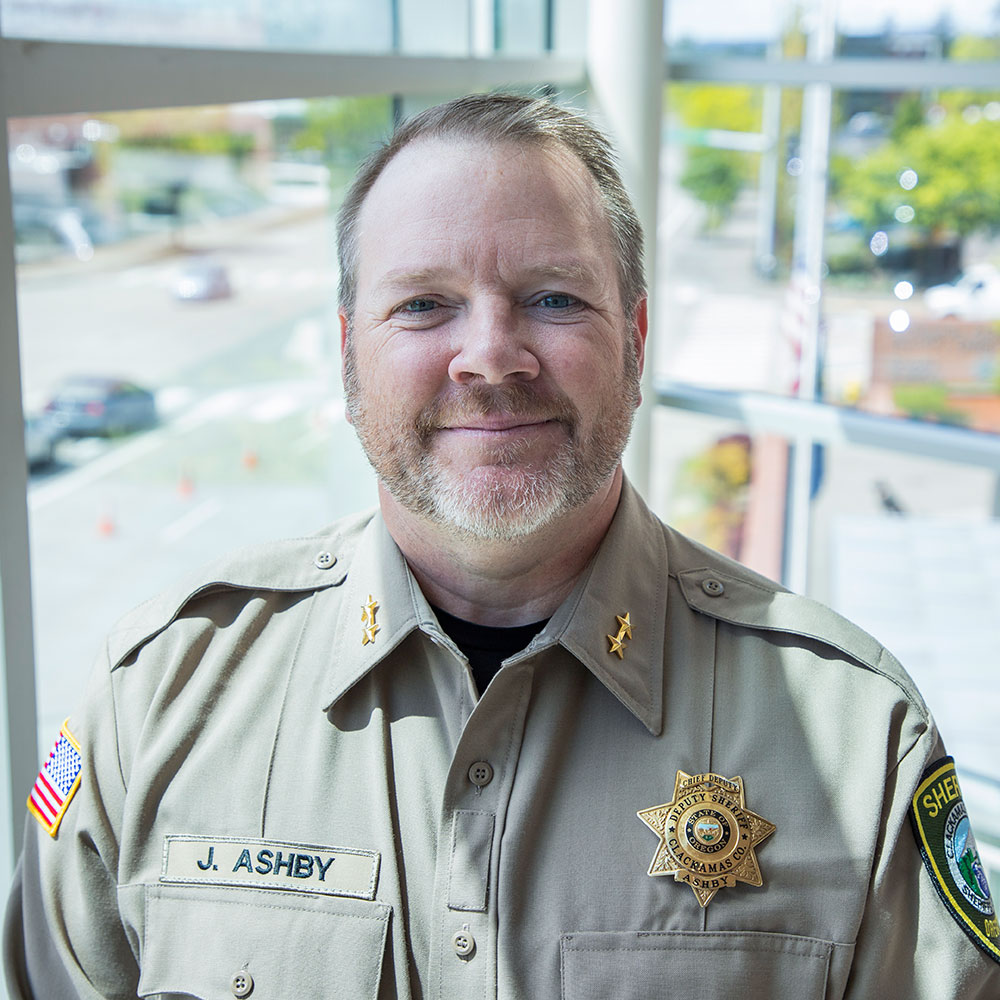 He lives in the Redland area with his wife and two daughters. 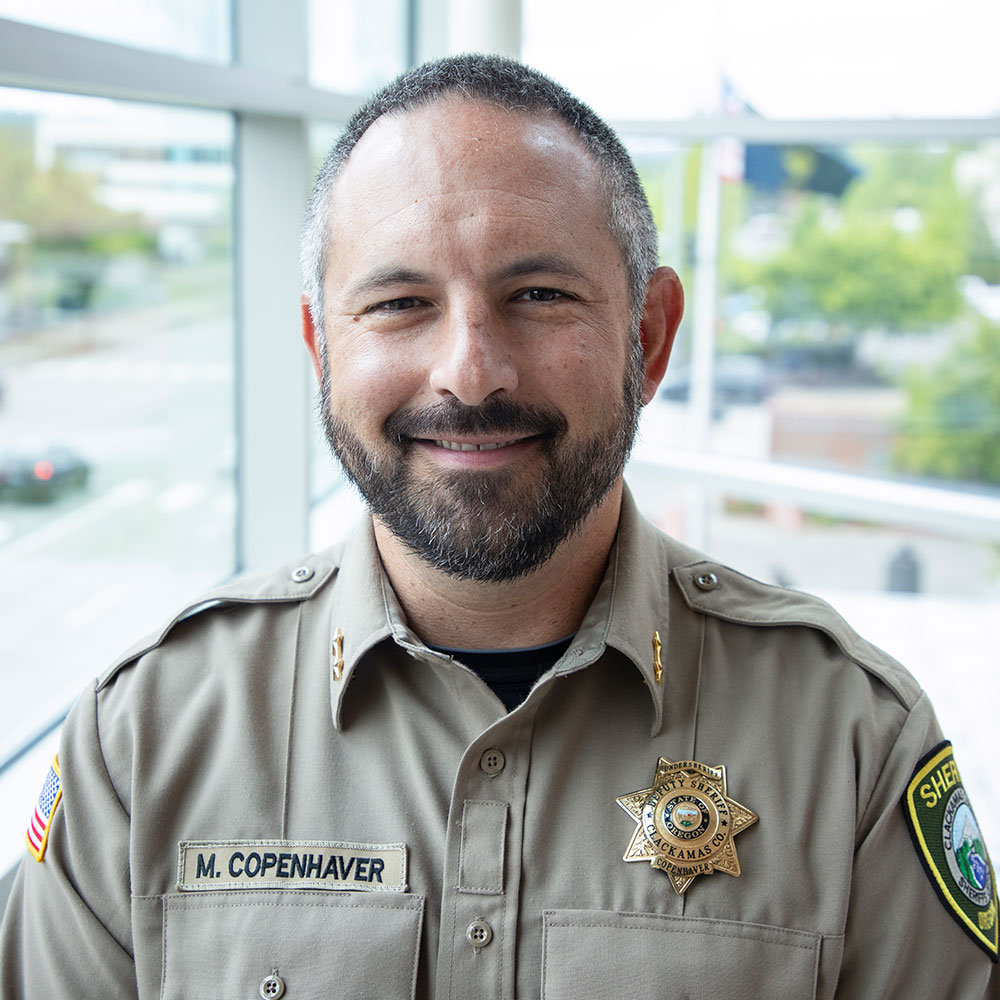 Undersheriff Michael Copenhaver is a 17-year veteran of the Clackamas County Sheriff’s Office. He holds a Bachelor of Arts degree in Political Science from Oregon State University as well as Basic, Intermediate, Advanced and Supervisory Certificates from DPSST.

Prior to this appointment, Undersheriff Copenhaver served as Director of A Safe Place Family Justice Center, where he was commander of the Sheriff’s Office Domestic Violence Enhanced Response Team (DVERT) and the newly formed Adult Sex Crimes Unit. 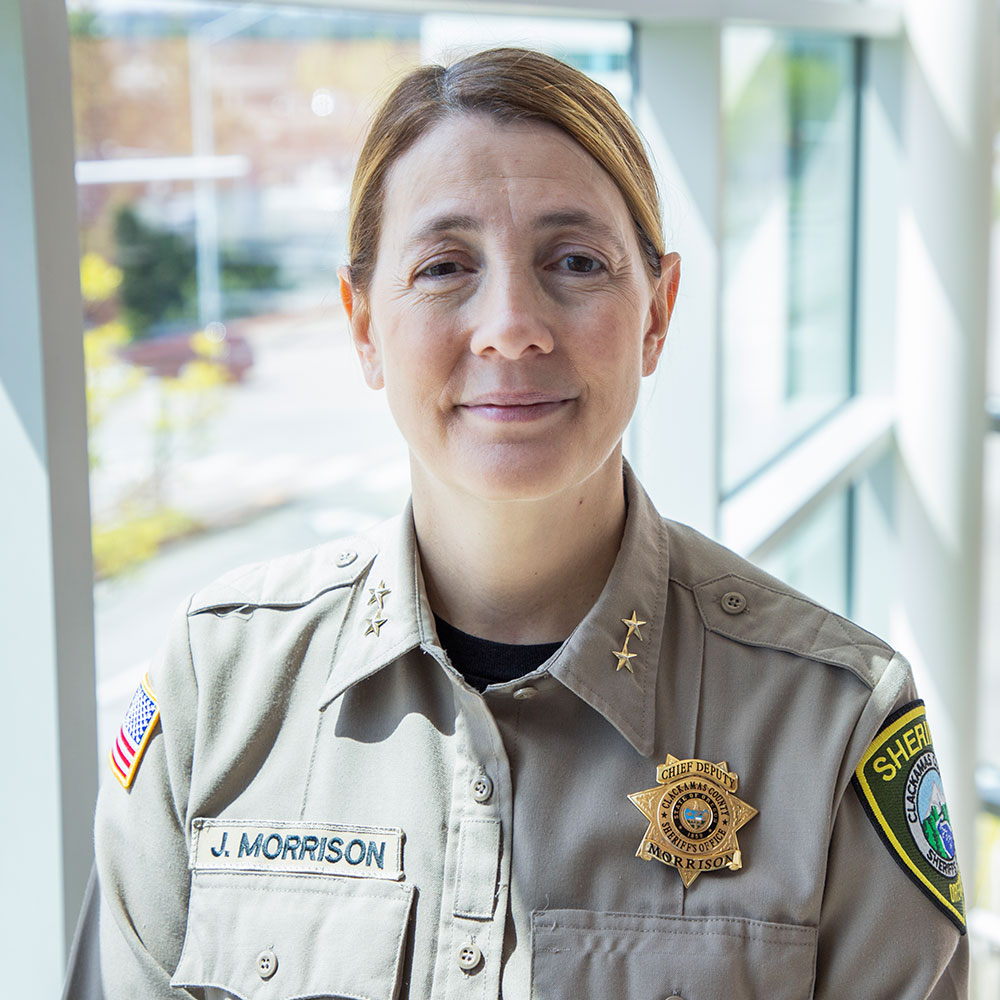 Undersheriff Jenna Morrison graduated from The Ohio State University in 1995 with her Bachelors of Science in Social Work. She began her career at the Benton County Sheriff's Office where she spent 12 years as a Parole & Probation Officer, Corporal and Sergeant. While there, she was part of Search and Rescue, a member of the Public Information Officer team and certified as a Defensive Tactics Instructor. In 2009, Jenna was hired as a Community Corrections Manager for Clackamas County Community Corrections. In November 2015 she was promoted to Clackamas County Sheriff’s Office Captain and served as the Community Corrections Director. In 2019 she was promoted to Chief Deputy.

She holds Basic, Intermediate, Advanced, Supervisory, Management and Executive Certifications in Parole and Probation from DPSST; and is currently working on certification in Corrections. Jenna has served as the Secretary of the Oregon Association of Community Correction Directors and served two terms as a board member of the Oregon Psychiatric Security Board. She is a graduate of Clackamas County’s Leadership program. Jenna received the award from Oregon State Sheriff’s Association as Parole and Probation Commander of the Year in 2016. Clackamas County’s Women in Business and Leadership featured her in 2018. 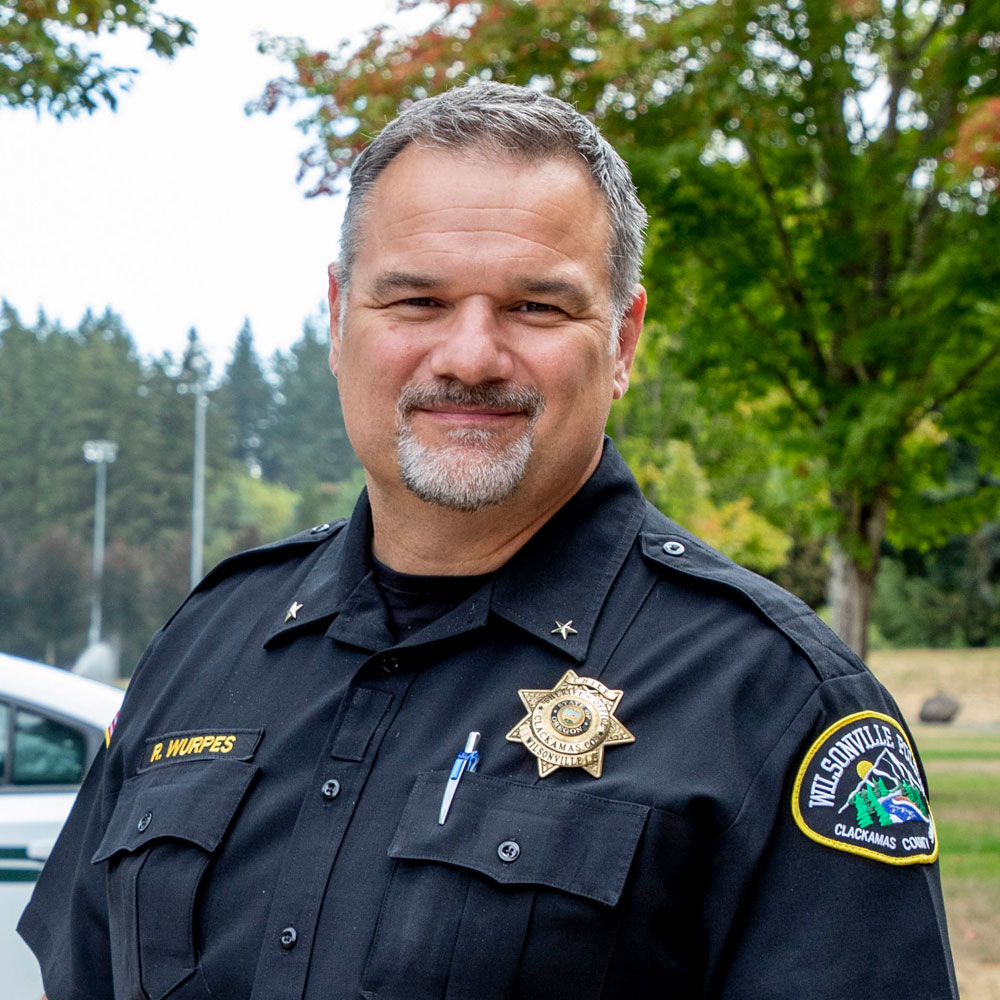 After serving in the Army and Army National Guard, Captain Robert Wurpes started his law-enforcement career as a Reserve Deputy in Multnomah County in 1998. In 1999 he was hired by the Clackamas County Sheriff’s Office.

As a deputy, he served in several roles, including Patrol deputy, Field Training Officer, Search & Rescue SCUBA diver, and Marine Patrol deputy. In 2008, he was named "Marine Officer of the Year" by the Oregon State Marine Board. In 2009, he was promoted to sergeant, serving as a Patrol sergeant, Water Rescue Team supervisor, public information officer, law-enforcement liaison on the State Fire Marshal’s Incident Command Team, and as a member of a FEMA Type 1 water rescue team.

Wurpes holds a current certification as an EMT and is a graduate of the Clackamas County Leadership Academy.

He is the son of immigrants and is married with two children. He also enjoys skiing, motorcycling, and travel, having visited 27 countries. 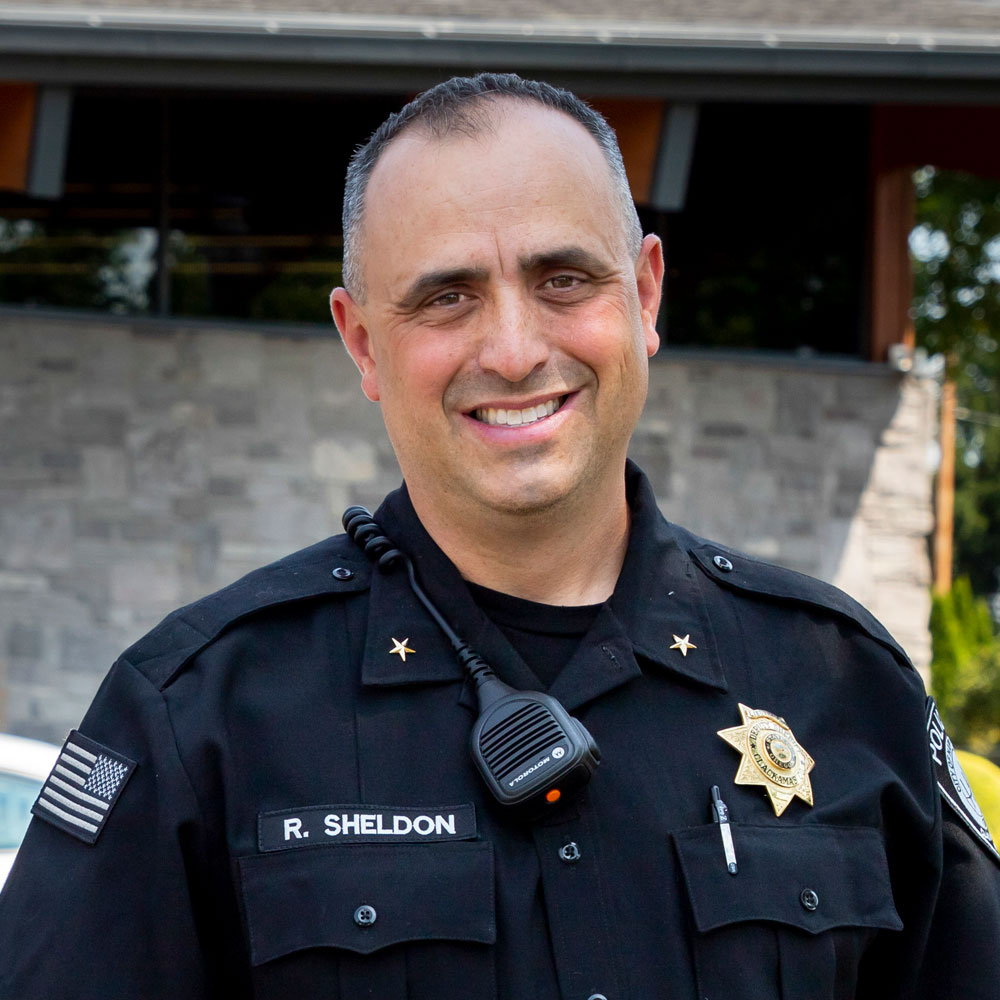 Captain Richard Sheldon currently serves as our contracted Police Chief for the City of Happy Valley. He started his law-enforcement career in 1998, as a cadet with the Clatsop County Sheriff's Office, working in the Marine Patrol and Civil Process Service while attending college.

In 2000 Sheldon joined the Army's Military Police Corps; he deployed to Bosnia, working with the International Police Task Force, and later deployed to Iraq, where his unit helped set up the Iraqi Police in the Sadr City (Previously Saddam City) area of Baghdad in 2003. Sheldon left active Army service in 2005 and joined the Idaho National Guard, where he mobilized for Hurricane Katrina. In 2008 he was activated to Afghanistan, where he worked as an advisor to the Afghan National Army. He retired from the Army Reserve in June 2021.

He joined the Lincoln City Police Department in 2007, where he was named "DUI Enforcement Officer of the Year" for 2009. He joined the Clackamas County Sheriff's Office in 2010.

As a CCSO Patrol deputy, Sheldon served in the contract cities of Wilsonville, Damascus and Estacada. He manned a traffic car for Clackamas County and the City of Damascus. As a deputy and sergeant, he also served as a Field Training Officer (FTO) for six years and CCPOA shop steward for six years. He is an SFST Instructor and Drug Recognition Expert.

Sheldon served as a Patrol Sergeant for CCSO and its contract city Wilsonville, and as an FTO Sergeant and Motor Sergeant. As a Detective Sergeant, he served on the Domestic Violence and Enhanced Response Team (DVERT), Adult Sex Crimes Unit and Child Abuse Team.

Following his promotion to Lieutenant, he served as the Director of A Safe Place Family Justice Center, where he supervised the Adult Sex Crimes Unit and DVERT.

Capt. Sheldon has a Bachelor of Arts Degree in Criminal Justice and holds Basic, Intermediate, Advanced and Supervisory Certificates from DPSST. He has also completed the Oregon DPSST Supervisory Leadership Academy, The International Public Safety Leadership and Ethics Institute Course, and the FBI LEEDA Command Course.

He lives in Sandy with his wife and three children, and enjoys spending time with them outdoors, especially fishing and hunting. 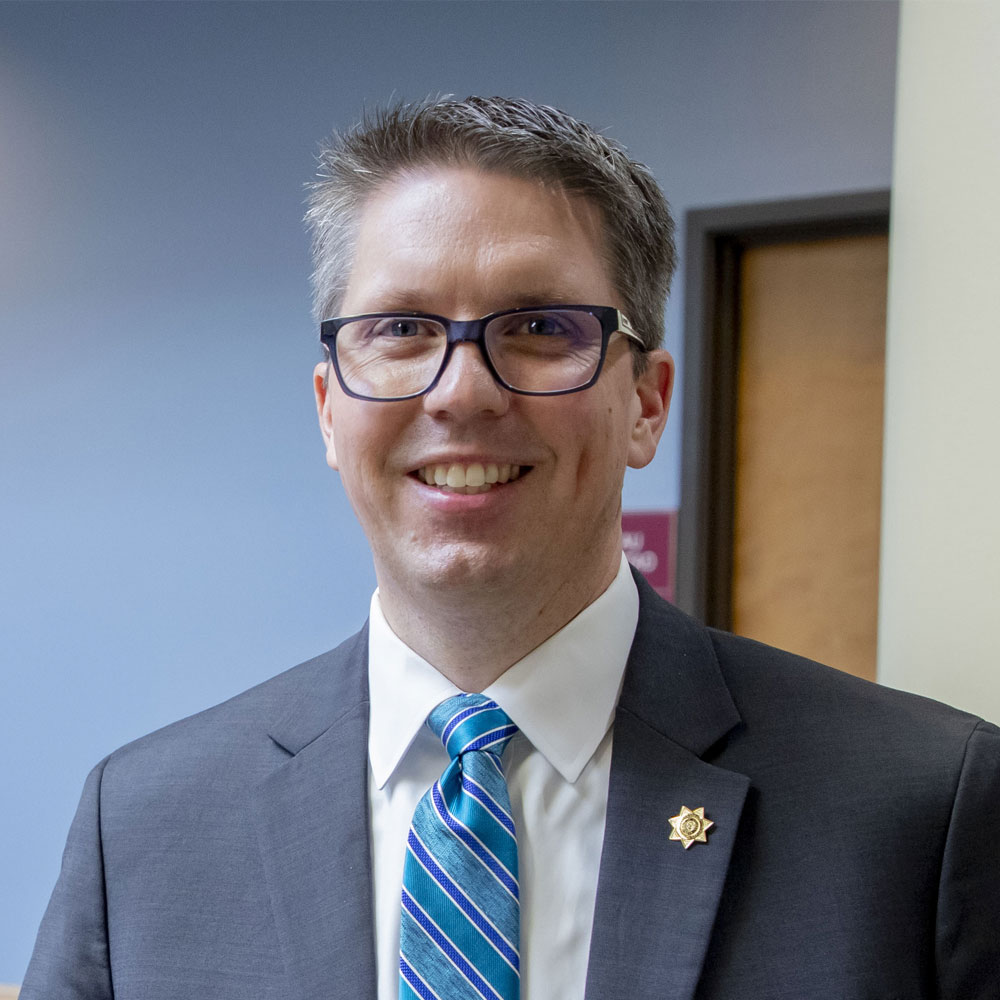 During his career, Captain McDonald has represented Parole & Probation in numerous local community groups, statewide networks and been the face of the agency for several media outlets. As a Community Corrections Supervisor, he helped lead a local and statewide effort to increase the collections of restitution owed to crime victims. Captain McDonald represents the Oregon Association of Community Corrections Directors (OACCD) as a liaison to the Sex Offender Supervision Network (SOSN), working on legislative concepts and providing testimony on laws and legislation. He holds his Basic, Intermediate, Advanced, Supervisory and Middle Management Certification in Parole and Probation from DPSST. Captain McDonald is a graduate of the Clackamas County Leadership Academy.

He graduated with a Bachelors of Criminal Justices from Seattle University in 1997. 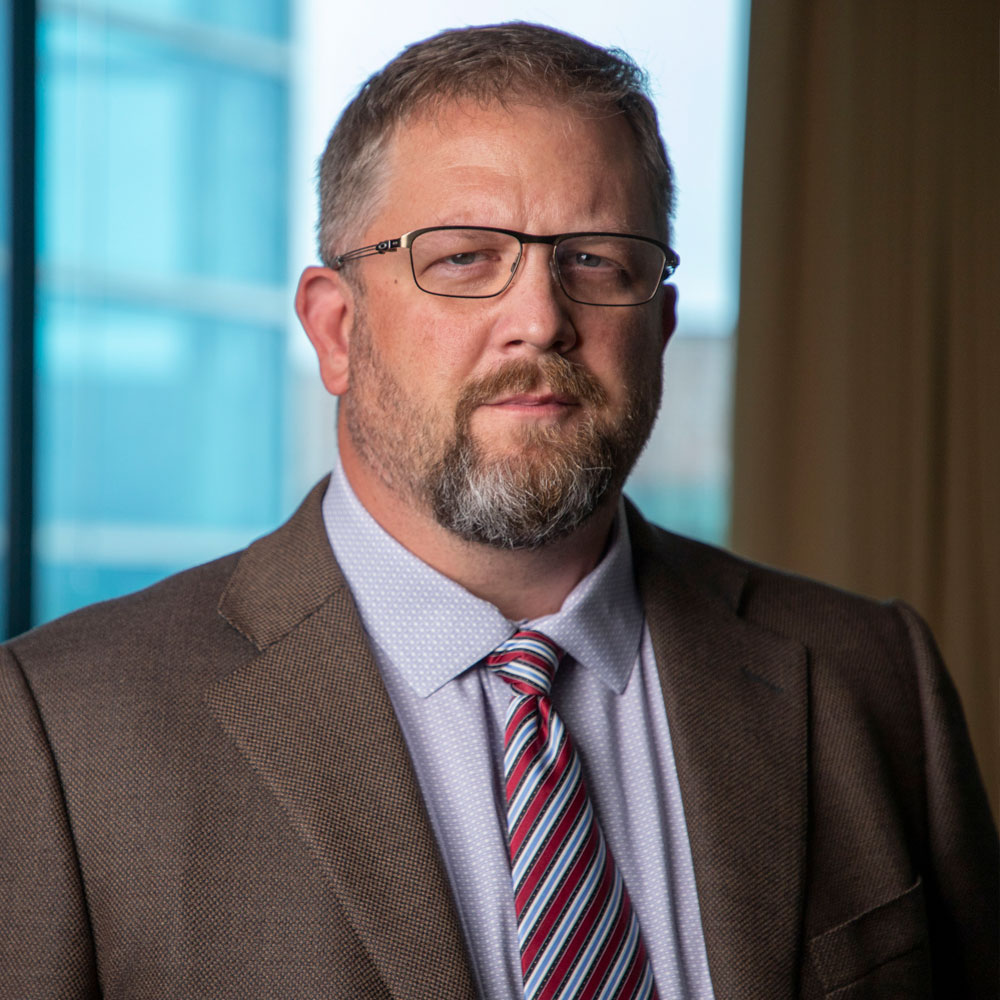 Captain Marcus Wold graduated from Western Oregon State College in 1995 with a Bachelor of Science degree in Criminal Justice. He began his law-enforcement career as an intern for the United States Marshals Service, then as a Reserve Deputy for the Clackamas County Sheriff's Office beginning in 1996. He served with the Seaside Police Department as a patrol officer, High Risk Response Team member and detective before returning to the Clackamas County Sheriff's Office as a Patrol deputy in 2003.

During his tenure with CCSO, Wold has served as a lead SWAT firearms instructor for over 15 years. He has also served as a Patrol Deputy, Field Training Officer, Special Investigations Unit investigator, Patrol Sergeant, and Field Training Sergeant; he was Sergeant in charge of the Clackamas County Inter-agency Task Force (CCITF) for more than eight years, and also served as CCITF task-force commander. He has expertise in surveillance and high-risk arrest techniques.

While supervising CCITF, Wold worked closely with state, local and federal law-enforcement agencies, leading the task force in numerous high-level state and federal investigations. Wold was instrumental in establishing protocols and procedures for the investigation of overdose deaths, leading to the arrest and prosecution of offenders involved in the trafficking of dangerous drugs. Under his leadership, CCITF has been recognized nationally, receiving awards for its innovative approach to disrupting and dismantling drug trafficking organizations (DTOs). He has shared his knowledge and experience as a guest instructor, providing training to investigators throughout the state.

He holds basic, intermediate, advanced and supervisory certificates from DPSST, and was promoted to Captain in 2021.

Captain Wold is proud to have spent the majority of his life as a resident of Clackamas County, where he currently resides with his family. His hobbies include hunting, fishing and shooting sports. 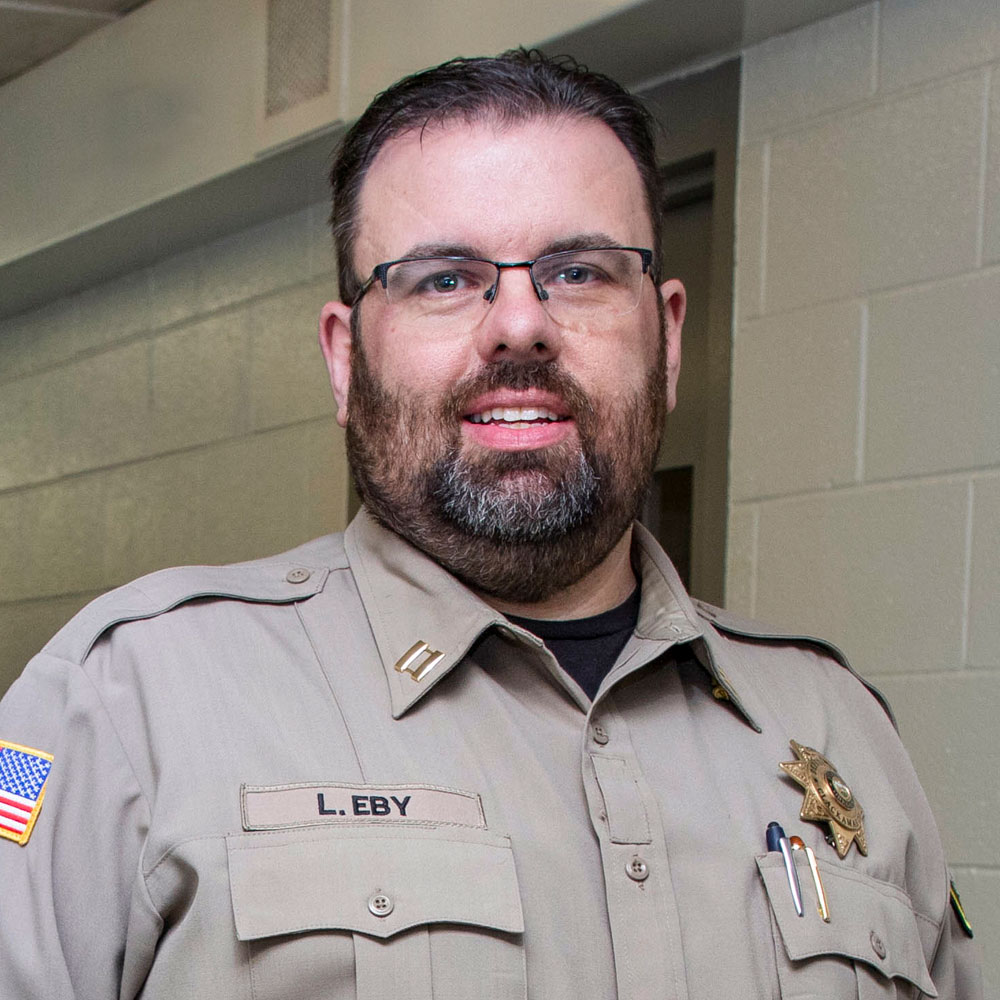 Captain Eby holds Basic, Intermediate, Supervisory, Middle Management and Executive Certification in Corrections from DPSST. He also holds an instructor certification at DPSST, where he trains Basic Corrections and Basic Police classes in corrections law and other legal topics. These classes have covered topics including civil liability and PREA, the criminal justice system, use of force for corrections personnel, inmate rights, employee discipline and collective bargaining. He is also a Certified Jail Inspector for the State of Oregon, and has written for the National Institute of Corrections (NIC), an agency of the U.S. Department of Justice. 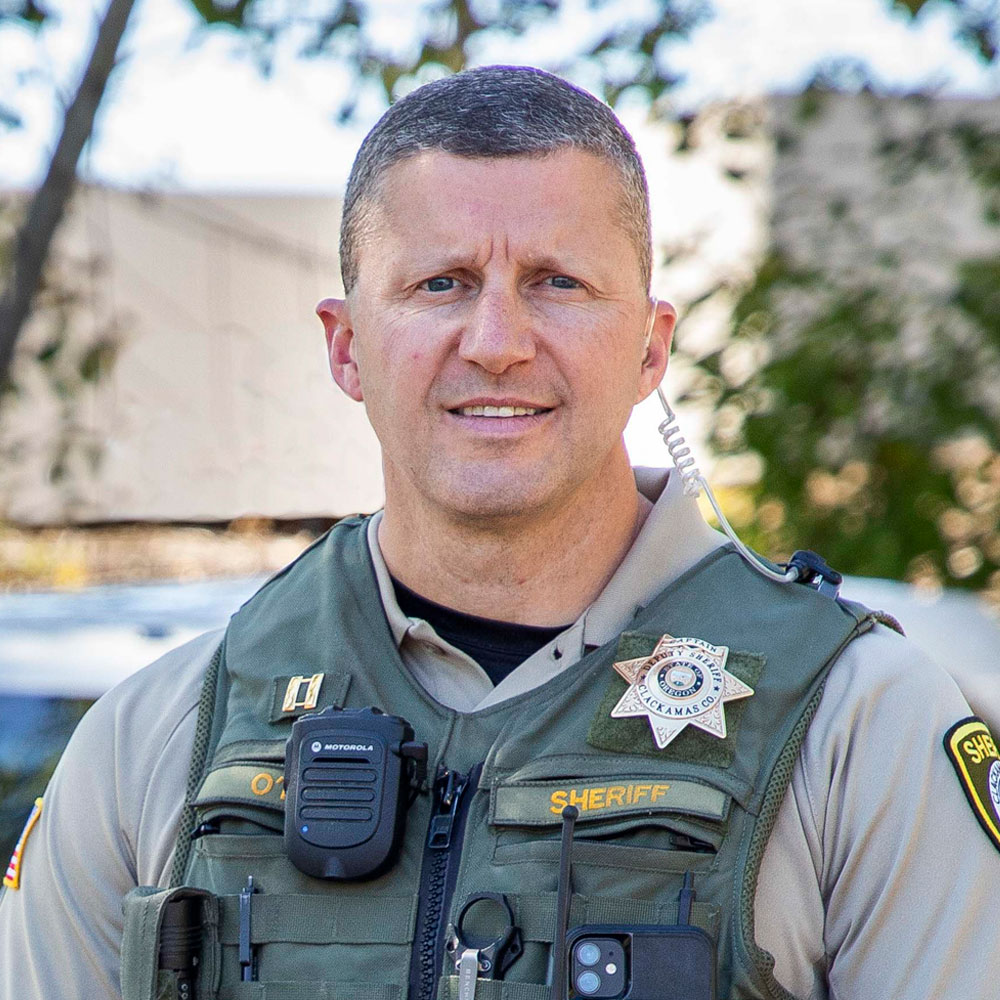 Captain Brad O'Neil started as a Cadet at the Sheriff's Office in 1995. He was hired as a full-time Patrol deputy in November 1999.

O'Neil has served in many capacities at the Sheriff's Office, including Field Training Officer, Emergency Vehicle Operations Course (EVOC) instructor, Cadet advisor, and Search & Rescue commander. He spent 13 years as a K9 handler and five years as a K9 Sergeant and K9 Unit Commander.

He is a Master K9 Detection Trainer with the Oregon Police Canine Association (OPCA); O'Neil also served as OPCA's Sergeant-at-Arms and President.

O'Neil was promoted to Sergeant in 2013, Lieutenant in 2019 — serving as Investigations Division Commander for one-and-a-half years — and Captain in 2021. He has Basic, Intermediate, Advanced, Supervisory, Management, and Executive certificates through DPSST. 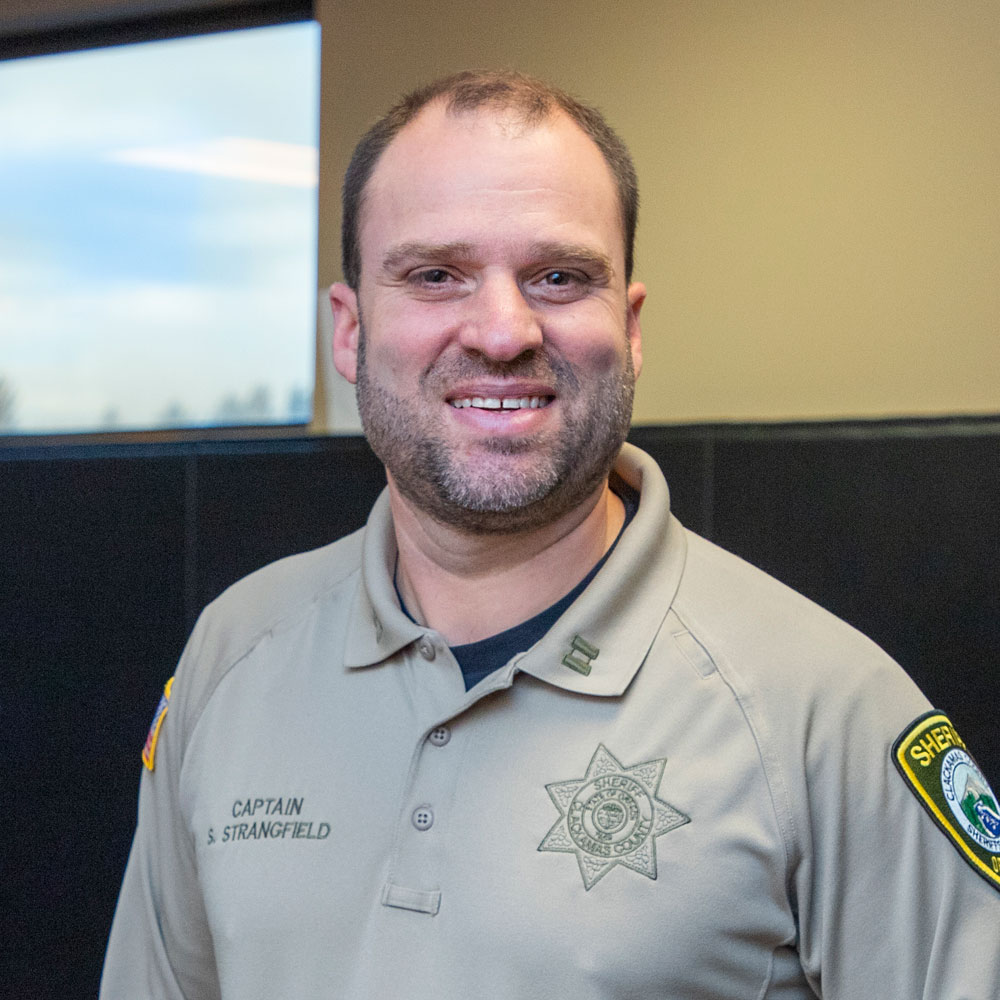 Captain Shane Strangfield has served with the Clackamas County Sheriff's Office since 1996 when he was hired as a Corrections Deputy. In 1998 he was promoted to Patrol Deputy, promoted in 2008 to Patrol Sergeant, promoted in 2010 to Patrol Lieutenant, and promoted to Captain in 2018. From January 2011 to January of 2017 he served as the Police Chief for the city of Happy Valley which contracts with the Sheriff’s Office for police services. He also served as the police chief for the cities of Estacada and Damascus.

Captain Strangfield has worked many assignments at the Sheriff’s Office including Defensive Tactics Unit instructor and supervisor, Watch Commander, Search and Rescue Program Manager, Cadet Program Manager, and the Professional Standards Unit manager. In 1999, he was assigned to the agency's Honor Guard Team, currently serving as team commander. Captain Strangfield is a founding member of the Oregon Fallen Badge Foundation and serves as the foundation’s president. 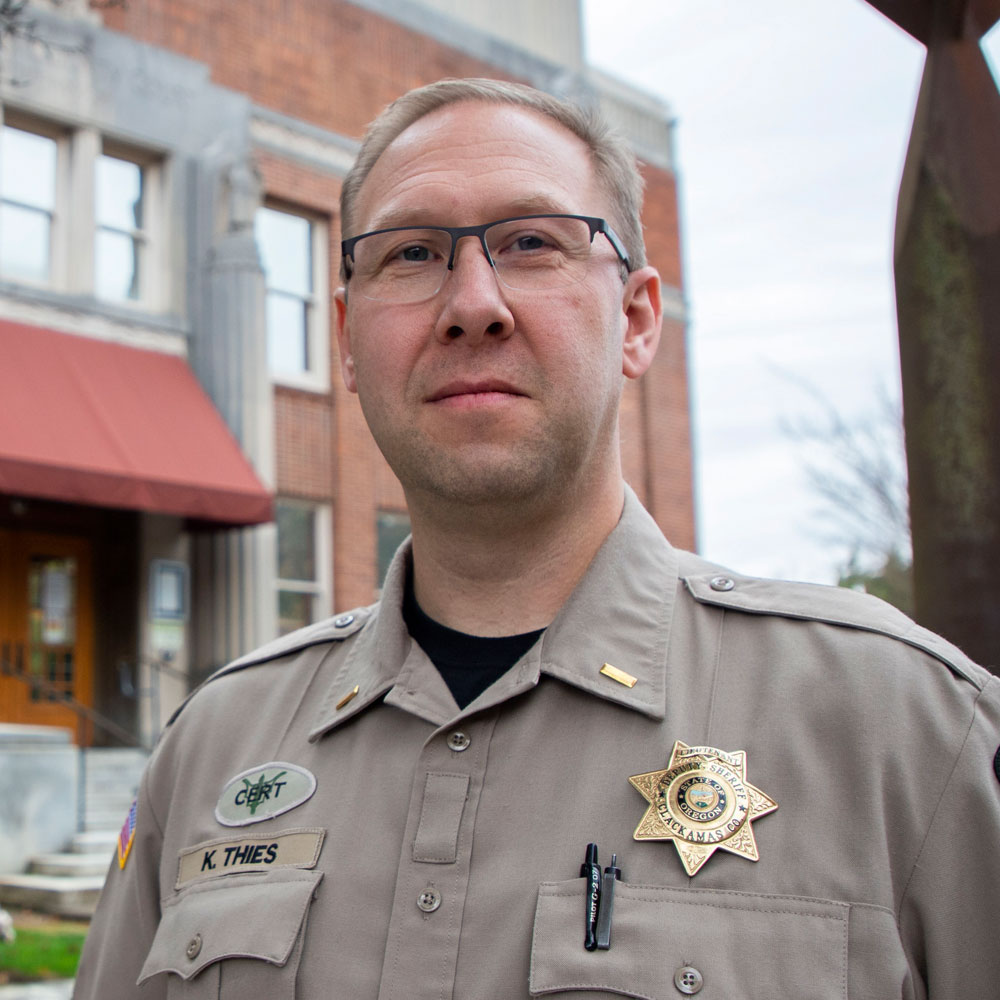 Lieutenant Kevin Thies joined the Clackamas County Sheriff’s Office in 1999 as a Deputy assigned to the Jail Division. He was promoted to Sergeant in 2007, and to Lieutenant in 2013. Over the course of his career, Lieutenant Thies has served as a Jail Deputy, Field Training Officer, CERT Team Member and Commander, Jail Shift Sergeant, Classification Deputy and Supervisor, Administrative and Operations Sergeant, Dayshift and Graveyard Watch Commander, Administrative and Operations Lieutenant, and a Background Investigator.

Lieutenant Thies is a 1997 graduate of Southern Oregon University with a BS in Criminology. Lieutenant Thies has obtained Basic, Intermediate, Supervisory, Middle Management, and Executive Certifications in Corrections from DPSST. He is a graduate of the Clackamas County Leadership Academy and the Oregon State Sheriff’s Leadership Academy. Lieutenant Thies is also a Certified Jail Inspector and Team Lead for the State of Oregon. He is an active member of the Oregon State Sheriff’s Association with teaching and coordinating training classes and is a council member for the Tactical, Jail, and Civil disciplines.

Lieutenant Thies currently is assigned to lead the Civil Division that includes; the daily sheriff operations inside the Clackamas County Courthouse, the Concealed Handgun Unit, and the Civil Process section of the Sheriff’s Office.