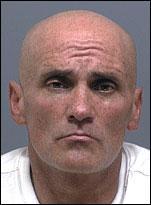 Details: Sometime in the hours prior to 8:00am on 10/20/2006, William Andrew Corpe was murdered while traveling down the Springwater Trail in the area of SE Johnson Creek Blvd and SE Bell Ave.

Corpe was last seen alive in the early morning hours of 10/20/07. Corpe was shot several times in the head, and neighbors in the area reported hearing shots at approximately 4 a.m. Corpe's body was discovered dumped in Johnson Creek at approximately 8:30am on 10/20/2006.

To Report Info: Anyone with information about this crime is urged to call the Clackamas County Sheriff's Office Tip Line at (503) 723-4949 or use the online e-mail form.