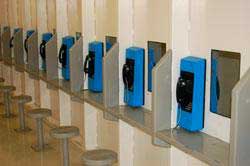 The Clackamas County Jail provides telephone usage to unrestricted inmates so they can maintain personal communications and ties with friends and family to facilitate their future transition from jail life to community life.

Our policy is ensure the jail's safety, security, order, and efficient operation while using the least restrictive means possible to regulate general inmate telephone use.

Within a reasonable time frame following the admission process, inmates shall be allowed to use the phone to contact family/friends or their attorney -- unless the intake forms have not been completed due to the inmate's disruptive behavior.

Now Available: You can now leave a voicemail message for about the price of a local phone call. Call 866-516-0115 and follow the automated instructions.

Telephones are generally available every day.

Inmates may use telephones in their housing area from late morning through late evening. The exact times authorized by the supervisor on duty are dependent on security issues. Calls automatically "time out" disconnect after 15 minutes.

These rules will be posted for inmates to see in their cell blocks. They are also listed in the inmate manual. In addition, inmates may ask deputies to explain any of the rules the do not understand. Telephone calls may be monitored or recorded to prevent introduction of contraband and to prevent violations of law and/or jail inmate rules.

Telephones are a privilege -- therefore, they must be used in a manner that complies with the state laws, county ordinances, and jail inmate rules.

Inmates who misuse the telephone system may be warned, informally disciplined, lose their telephone privileges, or subject themselves to major Jail discipline and/or criminal action if and when appropriate.

A citizen, upon request, may have his or her telephone number blocked from being called by the jail inmate telephone system. If you want your phone blocked, call 503-722-6221.

Blocking a telephone number can take up to 24 hours, excluding weekends and holidays.