The purpose of this project is to provide decent, safe and sanitary shelter for our veterans. As a county and community, we must be responsive to the needs of our residents. Helping people live independent, productive lives benefits the community as a whole.

Update (12/10/19): In the midst of the holiday season, many of our residents, businesses and stakeholders have contacted Clackamas County to inquire as to how they can make donations to the Veterans Village. We sincerely appreciate the sentiment and the ongoing support from the community to make this project a success.

Clackamas County cannot accept cash donations for the Village. Please be advised that the Village is operated through a nonprofit contractor, Do Good Multnomah, which specializes in providing supportive housing and emergency shelter to houseless veterans in our region. Anyone is free to give to this organization from its front page, click the “Write us a comment” box, and specify your donation is for the Clackamas County Veterans Village. Thank you.

Note: In no way, shape or form is Clackamas County asking people to donate to Do Good Multnomah. This message is simply being posted in response to several inquiries we have received.

In early October 2018, Clackamas County Commissioners realized a long-awaited goal that helps get more homeless veterans off the streets.

The Clackamas County Veterans Village: A Transitional Shelter Community for Veterans, is the product of intense work and actions by not only commissioners and county staff, but dozens of partners –including nonprofits, charities, local governments and businesses.

The village, located in the Clackamas area, currently houses 15 pods. Each pod is designed for one resident, and provides a safe space to sleep and store personal items. The village also has shared kitchen and bathroom/shower facilities, as well as meeting spaces.

Those meeting spaces are key, as the residents will have onsite access to a number of important services that were selected so these veterans can become self-sufficient and eventually move into stable housing.

An opening ceremony for the village was held a couple of weeks prior to residents moving in. This moving event provided an opportunity for the commissioners to say thank you to all those involved in this important project.

The state of homelessness in Clackamas County

Homelessness is a serious problem in Clackamas County, and commissioners are committed to addressing it.

Clackamas County coordinates a homeless count every two years. The last one, conducted in January 2017, found nearly 2,300 homeless people. That was a 4.4 percent increase from two years earlier.

People included in the count were either unsheltered (living in places not meant for people to live) or unstably housed (staying with others due to economic hardship or living in hotels/motels).

The 2017 count included 85 military veterans, 52 of whom were unsheltered.

The why and the how

Years ago, commissioners adopted Performance Clackamas, a strategic plan for the county. This plan is updated as needed, but has always codified sheltering homeless veterans as a goal (out of only 28). Our goal is to ensure that all veterans are sheltered by 2019.

Clackamas County already owned the land for the village site in the Clackamas area. Commissioners chose to invest $300,000 in 2016 out of the county’s general fund for the project.

Admittedly, this project took some time to reach fruition. But this is because it is the first permitted and code compliant one of its kind in Oregon. Because of this, other municipalities struggling with homelessness throughout the state may be able to replicate this model.

The pods were constructed over 14 months. Hundreds of volunteers helped by painting and performing light construction. For their work, we are eternally grateful.

Life at the village: A new kind of community

This village truly is the start of a new community. Residents will share responsibilities and play significant roles in self-governing. Through this – and the regular collaboration with their peers – these homeless veterans will regain a sense of community that they may have lost.

The village is operated by Do Good Multnomah, a veteran-managed nonprofit specializing in providing services to homeless veterans.

The entire effort centers on getting these residents back on their feet so that they can be fully self-sufficient. Services available onsite include:

Each sleeping pod is fully insulated, weather resistant and complies with all health and safety codes. The village residents will help to build the future pods on the site. There are plans to expand to 30 total pods.

It’s key to remember that the village is transitional in nature. Clackamas County will work with each veteran at the appropriate pace to help him or her re-enter society.

Program success is realized when residents leave the village and move into stable housing with the means to be self-supportive. We will work with each of them to obtain permanent housing.

In the run-up to the opening event, Clackamas County produced a series of Facebook Live posts that detailed many more aspects of the project. Topics included:

Clackamas County would be remiss not to thank the many partners who played a significant role in making this project come to fruition. We had many more than this, but wanted to highlight a few of the major contributors. 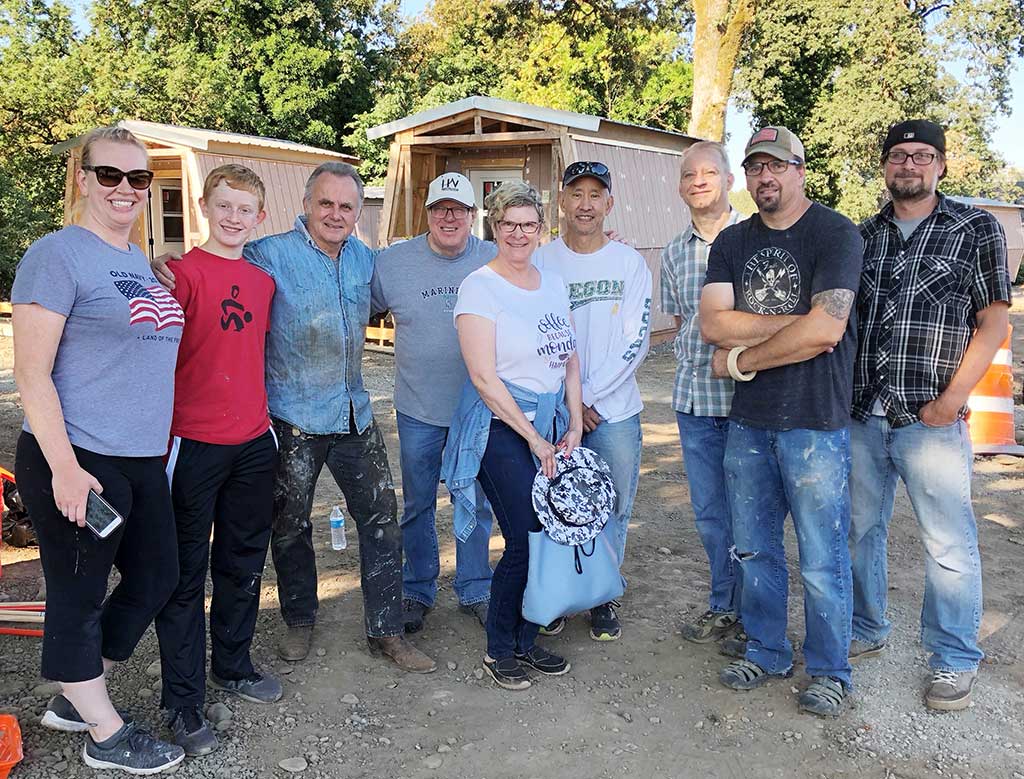 The site is unused industrial land is owned by the county’s Development Agency. Following a public process, the Board of County Commissioners approved zoning amendments in August 2017 to allow transitional shelter communities as a conditional use on light or general industrial land outside city limits that is owned by the county. The approved code changes expire after two years or the approval of three projects, whichever comes first.

In early December 2017, the Land Use Hearings Officer approved the application from the county’s Department of Health, Housing & Human Services for a conditional use permit for the site.

Reliable shelter is integral to health, security and safety. People who are homeless suffer higher rates of premature death, illnesses, psychiatric and addictive disorders, and have a higher risk of being sexually or physically assaulted than people who have a home.

Two county departments – Health, Housing & Human Services and Transportation and Development – drafted a Health and Safety Impact Review to identify ways to promote health and safety within the community.

While there is no direct access to public transit from the proposed site, plans are underway to provide a shuttle or other form of transportation to bus stops so community members can access training, counseling, shopping, medical services and other routine needs.

The site contains 15 innovatively-designed sleeping pods (with plans to expand to 30), a community kitchen, showers and restrooms, and a community room. 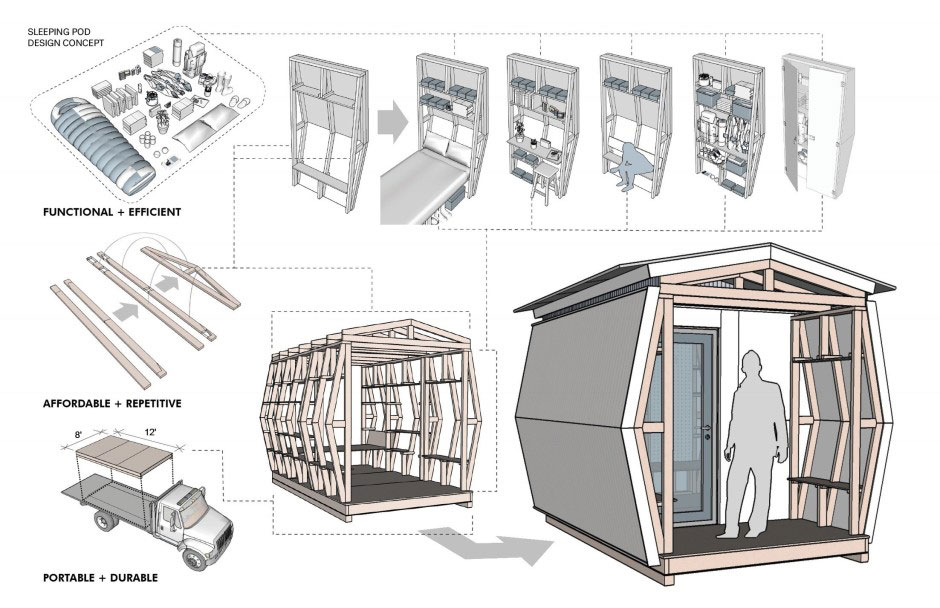 The sleeping pods, designed by Portland State University architecture students, are constructed from recycled trusses previously used for a stage at the popular Pickathon Music Festival.

Read the OPB story about the sleeping pods. 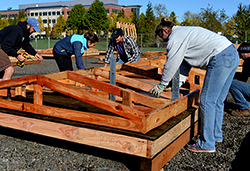 The initial focus of the project is to "shelter first." This approach seeks to provide adequate shelter prior to delivering services. Once a community member receives adequate shelter, they can then access services to become increasingly self-supportive. This model supports an individual's need to keep their housing and also makes it less likely they will return to homelessness.

Services/programs under consideration include the following:

For information on other county services for veterans or people who are experiencing homelessness, please contact:

There have been many successes since the launch of the Vets Village! Including: